India Jumps to 58th Position in WEF Index as Most Competitive Economy, US Tops List

India was ranked 58th with a score of 62.0 in the latest Global Competitiveness Report. On the list of 140 economies, the US is followed by Singapore and Germany at the second and the third positions respectively. Neighbouring country China was ranked at the 28th position in the overall list. Also Read - Donald Trump Offers to Mediate on Kashmir Issue Again Ahead of Meeting Imran Khan in Davos

India is followed by South Africa, which falls five places this year to 67th. Last is Brazil, which slips three places to 72nd place. In the adoption of Information and Communications Technology (ICT), India is among the weakest performers, with a score of 28.0 (117th), despite its vibrant IT sector. “The Republic of Korea is the world’s champion with a near perfect score of 91.3 on this pillar,” it said. Also Read - 'There's Hope'! Deepika Padukone's Beautiful Acceptance Speech at Davos 2020 About Mental Health is Important

“Compared with the 2017 backcast edition, India is up five places, the largest gain among G20 economies. India is a remarkable example of a country that has been able to accelerate on the pathway to innovation (where it now ranks 31st, with a score of 53.8), due, particularly, to the quality of its research institutions,” the WEF report said. 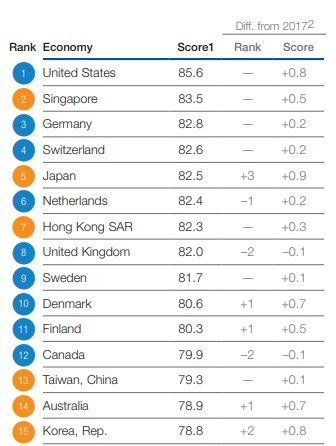 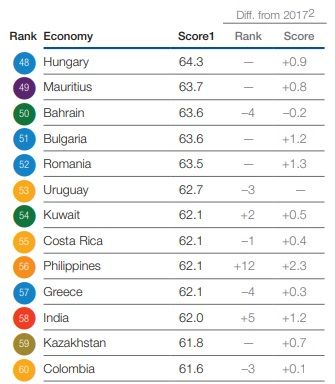