India on fast track of development: Narendra Modi on one year of NDA government

Prime Minister Narendra Modi, in a message on the first anniversary of his government on Tuesday, has expressed his happiness to see India on "the fast path of development", and added that the country's environment since the NDA Government came to power last May is "suffused with a new enthusiasm". 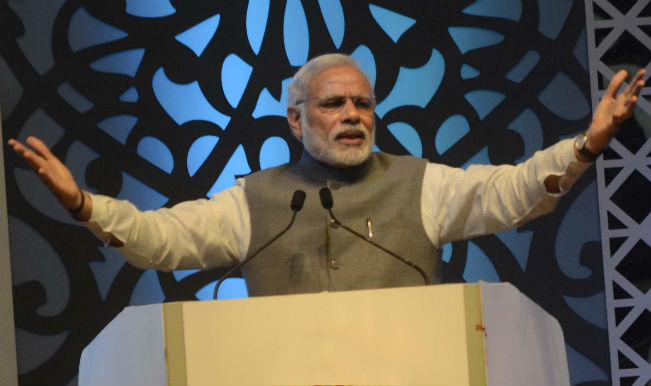 New Delhi, May 26: Prime Minister Narendra Modi, in a message on the first anniversary of his government on Tuesday, has expressed his happiness to see India on “the fast path of development”, and added that the country’s environment since the NDA Government came to power last May is “suffused with a new enthusiasm”. In a message on the completion of the first year of his government, the Prime Minister said the nation can be proud of the fact that it has an improved image on the international front and is determinedly marching forward to achieve its overall goal of providing welfare to the poor and lifting the marginalized sections of society. (Also read: Narendra Modi writes an open letter to the nation on completion of 1 year) Also Read - ‘You Can’t Teach Dignity’: TMC Leaders Slam BJP For Chanting Religious Slogans at Netaji Event

Prime Minister Modi’s message described himself as a “Pradhan Sevak”, and adds that he was fulfilling his responsibilities “with that bhakti”. “Antyodaya has been the principle of our political agenda. We have always kept in mind the welfare of the poor, marginalized, labourers and farmers. The Jan Dhan Yojana, opening a bank account for all families, PM Jeevan Jyoti Bima Yojana and the Atal Pension Fund are proof of this goal of Annandaata Sukhi Bhava. That is our supreme goal,” he said. Also Read - From LAC to LOC, World Witnessing Powerful Avatar of India Envisioned by Netaji, Says PM Modi in Kolkata

“When our government was formed, the economy was in doldrums and prices were rising. I am happy to say that India is on the fast path to development. The entire environment is suffused with a new enthusiasm. On the international front, India’s image has improved. Foreign investment has increased. Make in India and Skill India programmes are intended to create jobs in youth,” he further stated in his message.

“Our goal is to change the way our villages are by working to provide basic facilities. Like, every family should have 24-hour electricity, clean drinking water, toilets, roads and internet connectivity, so that the quality of life improves in villages. We are doing the job of connecting-from the borders of the country to the ports of the country, through roads and railways, and also through Digital India and connectivity,” the Prime Minister’s message stated.

“All Chief Ministers are also working with Team India to erase distances in the first year of this development journey. The country has found the faith it had lost in itself. This is just the beginning. The country is set to move forward. Come let us all resolve that our every step will be taken in the service of the nation,” the message adds. On farmers, the Prime Minister’s message says, “Our farmers toil to give us food security. PM Krishi Seenchai Yojana, Soil health, improving power situation for farmers, new urea programme are all aimed towards Krishi Vikas.” The message acknowledges the fact that farmers have faced difficulties due to unseasonal rains and hailstorms, but emphasizes that the government is with them.

“We are providing a corruption free, transparent administration where decisions are taken quickly. Earlier, natural resources like coal and spectrum were allocated on whims and fancies to industrialists. But we believe that it is the country’s wealth, and as the government’s mukhiya, I am the trustee. Hence, we decided to allocate these by auction. The country will earn three lakh crore with the coal auction. It will earn one lakh crore with spectrum auction. All this will benefit the economy,” the Prime Minister’s message said.

“We have established a Mudra Bank where by even the smallest business owner can get loans from 10,000 rupees to 10 lakhs easily. We promised we would bring back black money, and one of the first things we did when we formed government, was to form an SIT to do that. We also made strong law to book those who have illegally stashed wealth in foreign shores,” the message states further.

“Clean India programme’s goal is to ensure that women do not have to defecate in the open. Young girls should not be bereft of education because of lack of toilets. Clean India programme also has the goal that children should not suffer from illnesses due to unhygienic conditions. The falling rate of births of girl children as compared to male children is a cause of concern. Beti Bachao Beti Padhao programme is to tackle this problem,” his message said. The message also states that down the ages, India ns have had faith in Mother Ganga, and to keep the river pure and clean, the government has launched the Namami Gangey programme.