New Delhi, Nov 2: India slipped 21 ranks on the World Economic Forum’s Global Gender Gap Index to reach 108 out of a total of 144 measured countries. This means that the gap between men and women

New Delhi, Nov 2: India slipped 21 ranks on the World Economic Forum’s Global Gender Gap Index to reach 108 out of a total of 144 measured countries. This means that the gap between men and women in the factors – political empowerment, economic participation, health, and education – has widened in last few years. India is trailing its neighbours China (100th) and Bangladesh (47th).

The reason for it is said to be less participation of women in the economy and low wages. “On average, 66 per cent of women’s work in India is unpaid, compared to 12 per cent of men’s,” the WEF report said.

“With more than 50 years having passed since the inauguration of the nation’s first female prime minister in 1966, maintaining its global top 20 ranking on the political empowerment sub-index will require India to make progress on this dimension with a new generation of female political leadership,” the report said. 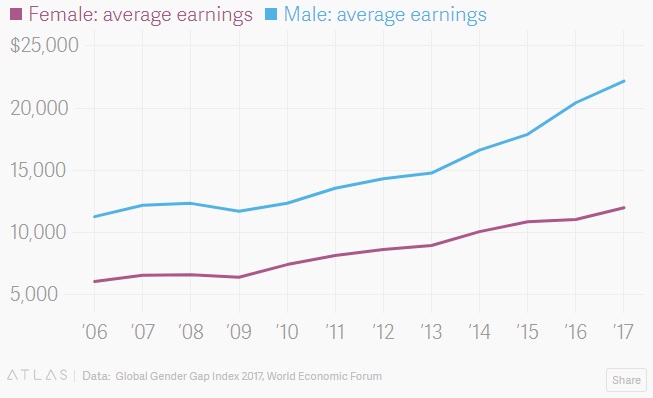 India’s 2017 ranking is 10 notches below its 2016 ranking. The WEF Global Gender Gap Report 2017 said that India has closed 67 per cent of its gender gap. “A decade of slow but steady progress on improving parity between the sexes came to a halt in 2017, with the global gender gap widening for the first time since the WEF’s Global Gender Gap Report was first published in 2006,” the report said.

India did better in political empowerment factor but was ranked close to the bottom in health, education and economic participation.

Last year, the Global Gender report had mentioned that it would take nearly 83 years to close the gap. “It was a disappointing year,” said Saadia Zahidi, head of education, gender and work at the World Economic Forum. However, at the current rate of progress, the gender gap will take nearly 100 years to bridge, WEF said.

The United States of America (USA) fell to rank 49 from 45 last year.

Iceland has ranked at the top position in the Global Gender Gap Index. The country, WEF said, has closed 88 per cent of the gender gap. For last years, Iceland has remained the world’s most gender-equal country. Norway stands at the second position. Norway is followed by Finland at number 3, Rwanda at 4, Sweden at 5, Nicaragua at 6, Slovenia at 7, Ireland at 8, New Zealand at 9 and the Philippines at 10.