A team of naturalists have found an entire family of the gigantic and rare Attacus Atlas moth, the world's largest, in the Western Ghats in Kolhapur 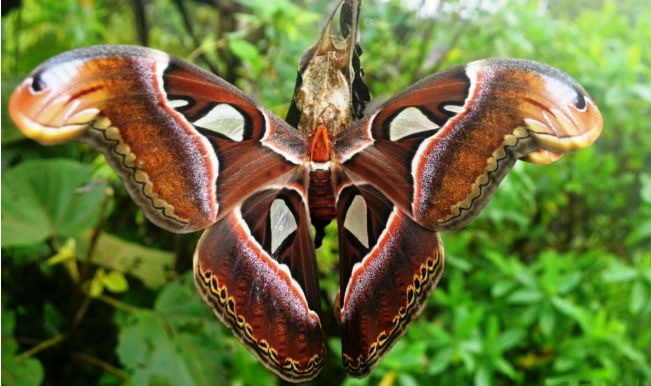 Kolhapur (Maharashtra), Sep 17: A team of naturalists have found an entire family of the gigantic and rare Attacus Atlas moth, the world’s largest, in the Western Ghats in Kolhapur. The discovery of these moths with a wing span of around 25-30 cms was made last week in the thick and lush green Tilari tropical forests of Chandgad sub-district, falling in the Western Ghats which are rich in flora of wild silk insects. Also Read - 5 Places in The Western Ghats That Must be Explored During The Monsoon

“We found a male and female moth, and their cocoon on some greenery in the deep forests when our team was searching for wild silk insects as part of a project by Council of Scientific & Industrial Research (CSIR),” the team head, Dr. A.D. Jadhav, Assistant Professor at Kolhapur’s Shivaji University, told IANS. Also Read - Why a Trek to Harischandragad is One of The Most Challenging Ones in India

The find is particularly exciting due to the Atlas Moths’ tough life cycle and sheer struggle for survival in nature and the availability of a mate in the open forests since it’s a rare species with the largest wing-size in the Lepidoptera group of insects, he said.

“Atlas Moth caterpillars (babies) are the favourite prey of other larger creatures, but its presence in this particular location shows richness of biodiversity of the flora and fauna in the Western Ghats, a mega-diversity hotspot in India. We are also trying to confirm whether this could be a new species, though there have been some earlier reports of sightings,” Jadhav noted.

The discovery could also prove to be a boon for CSIR’s project to promote the production and use of wild silk by locating some new eco-races or bio-types in the Western Ghats for the possibilities of getting bio-resources and their utilization in the production of better silk. While the Silkwork Moth, which belongs to a different but related family, makes a cocoon out of one unbroken silk strand, the Atlas Moths caterpillar weaves its cocoon out of broken strands of silk.

“This brown, wool-like silk of Atlas Moths is considered very durable and is famed as Fagara silk in north India,” Jadhav said. He said that in Maharashtra, Tasar silk and wild silk of Atlas Mylitta (one of the moths which produces silk) is produced on a commercial scale in Bhandara, Gadchiroli, Chandrapur and Gondiya districts of the eastern part of the state.

Now, the the Sericulture Section of the Shivaji University has successfully mated and fertilized around 150-200 egs of a female Atlas Mylitta moth and efforts are on to rear the worms by defining suitable food plants for their further multiplication in the natural environment, he said.

This technology of producing Atlas Moth eggs in laboratories to get wild silk will be made available to local villagers and tribals as a means of livelihood, preventing their migration to urban or semi-urban centres. The silk-producing Atlas Moths in India include Actias Selene, Antheraea Royalie, Samia Canningi, Cricular Trifenestrata, Atlas Mylitta, Philosamia Ricini and Antheraea Assamensis.

Billed as the largest saturniid moth found in the tropical and subtropical forests of South East Asia, they are common across the Malay archipelago, and some varieties are also found inside the Sanjay Gandhi National Park in north Mumbai. Jadhav said that Atlas Moth females are sexually passive, but release powerful pheromones which males can detect upto 25 km away with the chemoreceptors on their large feathery antennae.

Generally unstable fliers, the females are more homely and do not stray far from habitat but manage to attract males from afar. After mating, the female lays several 2.5 mm spherical eggs below leaves, from which dusty-green caterpillars hatch after a fortnight. They feed voraciously on the foliage of certain citrus and other evergreen trees and after they grow 4.5 inches, they pupate within papery cocoons interwoven into desiccated leaves – finally transforming and emerging as magnifncent adult moths after a month.