IIT-Delhi is the top-ranked institutes among the Indian varsities to have appeared in the rankings.

New Delhi, Mar 2: In the QS World University Rankings 2018, only six Indian universities have featured in the top 400 rankings. Out of the six, five are Indian Institutes of Technology (IITs). The only non-IIT, which has ranked in the World University Rankings 2018, is Indian Institute of Science (IISc) in Bengaluru. Also Read - Harvard, MIT File Lawsuit Against Trump Administration Over Visa Row For Foreign Students

IIT-Delhi is the top-ranked institutes among the Indian varsities to have appeared in the rankings. IIT-Delhi has been ranked at 172. It was ranked 185th in 2017. The rest in the line include IIT-Bombay (179), IISc (190), IIT-Madras (264), IIT-Kanpur (293) and IIT-Kharagpur (308). The university which has topped the list is Harvard University. Also Read - Want to Lead a Longer Life? Swap Red Meat For Plant Based Protein 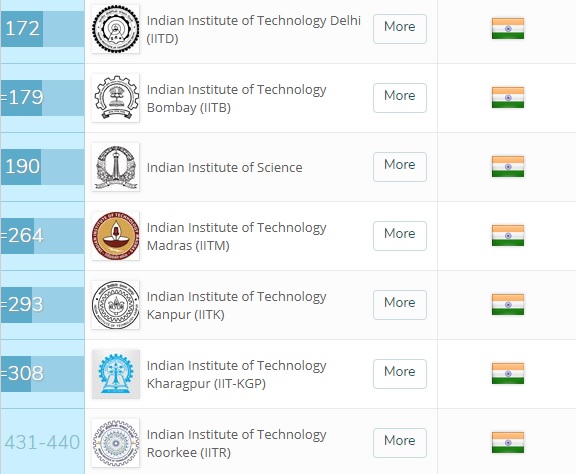 “As for this year’s results, Harvard University can once again proudly boast of being ranked number one for more subjects than any other institution. The Massachusetts university tops 14 different subject tables, one fewer than it did last year. The next two universities with the most number one positions are Massachusetts Institute of Technology (MIT) and the University of Oxford. These institutions are top of 12 and four subject tables respectively,” the official release said.

However, “universities in the US across all subjects have gone down more than they’ve gone up, something which is likely to be of concern to Secretary of Education Betsy DeVos and the wider Trump administration.”