Congress MP from Thiruvananthapuram Shashi Tharoor during the Inkpot India Conclave said while the military is the hard aspect of any foreign policy, culture is the soft one.

New Delhi: Congress MP from Thiruvananthapuram Shashi Tharoor on Monday addressed the valedictory session of the Inkpot India Conclave and said the rich culture of India is its biggest foreign policy. He said the culture is what attracts the West to the people of India.Also Read - Inkpot India Conclave: Uniform Civil Code Our Next Goal to Achieve, Says Shazia Ilmi

“While the military is the hard aspect of any foreign policy, culture is the soft one. Our culture includes our cuisine, dress and every aspect of our life. Our culture is what attracts the West to us. It is our biggest foreign policy asset. But we underestimate this,” Tharoor said in the valedictory session of the event. Also Read - Inkpot India's Zero-Waste Conclave to Debate on Section 377, Article 14, Social Media on November 18

The first edition of Inkpot India Conclave, a gathering of renowned leaders and opinion-makers from various creative fields, was held at Taj Ambassador which saw an interesting line-up of debates delivered by speakers such as Shobhaa De, Sonal Kalra, Jaya Jaitly, Shazia Ilmi, Kavita Devgan among others. Also Read - Inkpot India Conclave to Bring Together Leaders, Artists From Various Fields at One Platform on November 18

“For the past few decades, we have been seeing a growing inclination to Western culture. The Western culture, too, has many good aspects but that should not uproot us from our culture,” Simar Malhotra, the 22-year-old graduate from Stanford University, who curated the event, said.

The first-of-its-kind zero-waste conclave was organised to initiate a dialogue on re-inking India’s cultural heritage in various fields ranging from literature, nutrition, music to design.

Talking about the diversity in India’s music, Sonal Kalra said, “My India is diverse and secular. Our musical culture is so varied encompassing temple music, Sufi, classical music. The same can be said about Indian poetry.”

Addressing a session on how to make today’s children read Indian literature, author Shobhaa De said that the attempts to rewrite history must stop at once.

“If you can’t face the heat, you need to step out of the kitchen. One can’t afford to have thin skin in media. I have been viciously trolled for some of my most innocuous tweets. But I didn’t run for cover. I faced them,” Shobhaa De said on the issue of social media trolling. 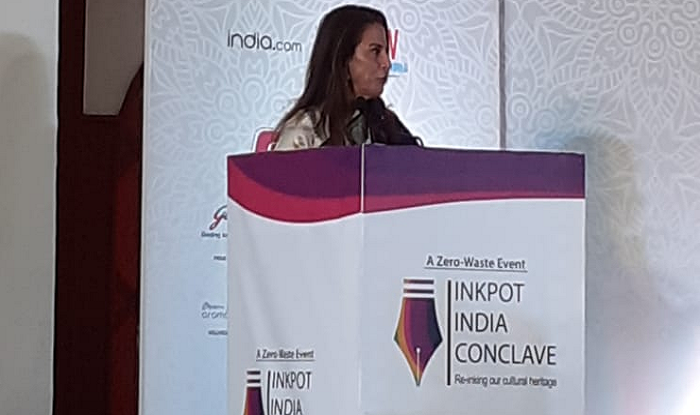 Commenting on the plight of craftsmen in India, Jaya Jaitly said, “Revenue and respect are the two things our craftsmen thrive on. I don’t like the word languishing the government likes to use to describe our craftsmen. In countries like Vietnam which are rich in crafts, governments don’t fund at all. We should not rely on government policy as governments get stuck in many things.”

The power-packed day-long event hosted incisive panel discussions, keynote addresses, and Q&A sessions. Along with this, celebrated artists from different parts of the country showcased their skills in the event.