France also said that the European Parliament is an institution independent of the Member States and the European Commission. A total of six anti-CAA resolutions have been moved in EU Parliament by over 600 out of 751 MPs.

Notably, France, a founding member of the EU and also a permanent member of the United Nations Security Council (UNSC), has also repeatedly backed India in the case of Jammu and Kashmir, calling it a bilateral dispute that should be resolved between India and Pakistan. Also Read - Anti-CAA Resolution Drafted in EU Parliament, Says 'Largest Statelessness Crisis Looming'

“For France, the Citizenship Amendment Act is India’s internal political matter. We have stated this on several occasions. European Parliament is an institution independent of Member States and the European Commission,” news agency ANI quoted French diplomatic sources as saying.

French diplomatic sources: For France, a founding member of European Union, the #CitizenshipAmendmentAct is India’s internal political matter. We have stated this on several occasions. European Parliament is an institution independent of Member States and the European Commission. pic.twitter.com/qMxZNkVN1q

Over 600 MPs of the 751-seat EU Parliament have moved resolutions on CAA, as well as Kashmir, noting that the CAA will lead to the ‘largest statelessness crisis’ in the world. The resolutions, tabled on January 22, will be debated on Wednesday and put to vote a day later.

Responding to the development, the government has called the CAA a matter that is ‘entirely internal to India,’ adding that it was adopted through ‘due process and democratic means’ after a public debate in both houses of Parliament.

In a tweet, the Congress, too, lashed out at the government, accusing it of ’embarrassing India once again.’ 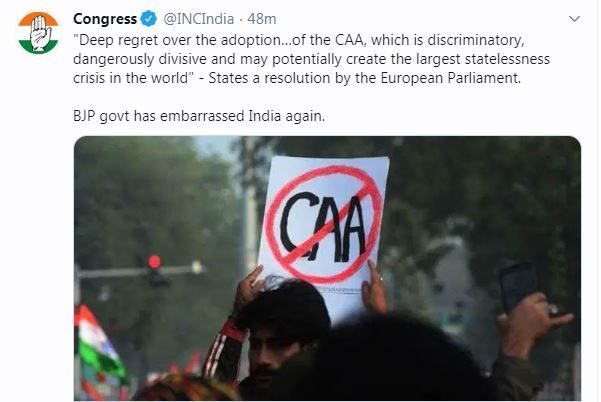 The CAA was passed by the Parliament last month and became a law on January 10. It proposes to grant Indian citizenship for non-Muslim minorities from Muslim-majority Afghanistan, Bangladesh and Pakistan, if they fled religious persecution and entered India before December 31, 2014.

However, it is the absence of Muslims from the list that has triggered massive protests across the country.