Jallikattu: All you need to know about the bull-taming festival in Tamil Nadu

The Union Ministry of Environment has lifted the ban on the conduct of Jallikattu in Tamil Nadu, Maharashtra, Karnataka, Punjab, Haryana, Kerala and Gujarat.

The Union Ministry of Environment has lifted the ban on the conduct of Jallikattu in Tamil Nadu, Maharashtra, Karnataka, Punjab, Haryana, Kerala and Gujarat. The Supreme Court had in May 2014 had banned bull fight and upheld a 2011 notification by the Ministry of Environment and Forests to include bulls in the category of animals that shall not be used as performing animals. After which bulls were not allowed to be exhibited or trained as performing animals for Jallikattu.Also Read - General Bipin Rawat’s Cremation on Friday: Govt Plans to Appoint New CDS in Next 7-10 Days | Key Points

Jallikattu is a bull taming sport played in Tamil Nadu as a per of Pongal festival celebrations on Mattu Pongal day in the state. Bulls are bred especially for this sporting event in t he state. The cattle bred for this purpose is known as ‘Jellicut’. Also Read - CDS Bipin Rawat Was 10 Mins Away To Defence Staff College In Wellington To Give Lecture When His Chopper Crashed

The term ‘Jallikattu’ originated from the words ‘Jalli’ and ‘Kattu’, that refers to silver or gold coins tied to the bulls’ horns. (Also Read: Centre allows Jallikattu in Tamil Nadu despite massive protests)

How did Jallikattu come into being 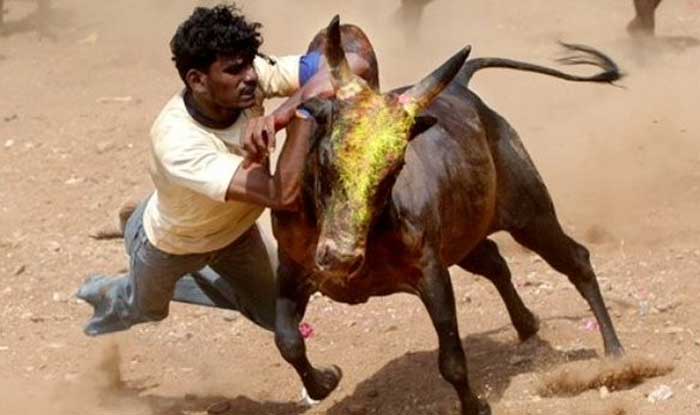 Jallikattu was a popular sport among warriors during the ancient times in Tamil Nadu. Bullfighting was common among Mullai division of the ancient Tamil country which later became a sport. The sport then became a sign of bravery for which prize money was introduced that encouraged people to participate in the event. A painting which was discovered in Madurai, Tamil Nadu some years back shows a man trying to control a bull. The painting dates back to 1,500 years.

There are many types of Jallikattu which is practiced in the state. Main three types include the following:

vaṭi manju viraṭṭu: Here a bull which is being released from an enclosure will be held in a distance or time. The person who manages to hold the animal within the time span in the particular distance will win the prize.

vēli viraṭṭu: Here the bull is released on a open ground while people try to gain control over it

vaṭam manjuviraṭṭu: Here a bull is tied to long rope while  a team of players try to gain control over the bull within a given time. (All India Radio News- Twitter)