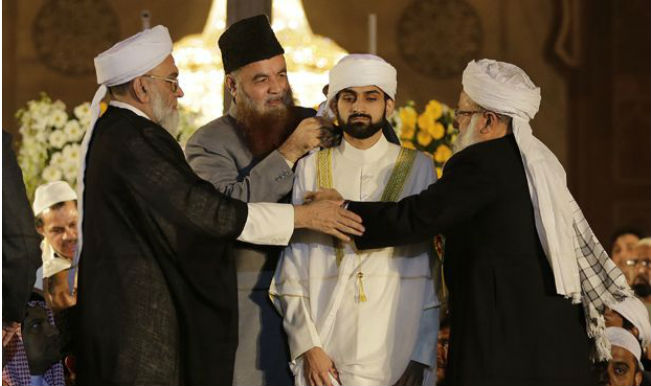 New Delhi, Nov 22: Shaban Bukhari, the 19-year-old son of Jama Masjid Shahi Imam Syed Ahmed Bukhari, was Saturday formally anointed the Naib Imam (deputy Imam) of the 17th century mosque at a ceremony here. The anointment, which was attended by religious leaders from India and abroad, comes in the face of objection by the Indian government and the Wakf Board, which termed the ceremony “illegal”. Also Read - Deserted Roads, Empty Markets: Hauntingly Beautiful Photographs of Delhi Under Lockdown Showcased at Exhibition

“I announce Shaban Bukhari as the Naib Imam of Jama Masjid. I hope he will live up to the expectations,” Syed Ahmed Bukhari said during the ceremony held at the red-stone mosque near the Red Fort. The senior Bukhari performed ‘dastarbandi’ (the ceremony) by tying a scarf around Shaban’s head who was dressed in a white customary gown. Also Read - Unlock 2.0: Delhi's Jama Masjid Reopens For Public 3 Weeks After Being Shut Due to COVID

He will be the 14th Naib Imam after his father who was anointed in 1973 and who became the chief custodian of the country’s largest mosque in 2000. Shaban, who is pursuing his bachelor’s degree in social work at Amity University, is now in line to become the next Shahi Imam. “I will try to fulfil all the responsibilities to the best of my ability,” Shaban said, standing atop a canopy-shaped structure on the mosque’s premises.

The Bukharis, originally from central Asia, have been the traditional custodians of the Jama Masjid since it was built during the Mughal era in the 17th century. The ceremony courted controversy after the central government and the Wakf Board told the Delhi High Court that the anointment was “illegal” and had no legal sanctity.

Sharif, however, did not attend the event. During the two-hour ceremony, various leaders slammed the Wakf Board for raising the objections and rallied behind Ahmed Bukhari. “New allegations are being levelled. The ceremony has been in existence for the past 400 years. Why is the Wakf Board raising this issue now? There seems to be a conspiracy,” a Muslim leader said.

The ceremony started after customary prayers at 5.30 p.m. Many religious leaders gave speeches and read out verses from the Quran. Some poets recited couplets and congratulated Shaban. The area around the mosque, trees and buildings in Old Delhi were illuminated with lights.