Amit Shah said, "BJP is open to all the options; it can form the government with someone's support and we may also support a party to provide J & K a stable government." 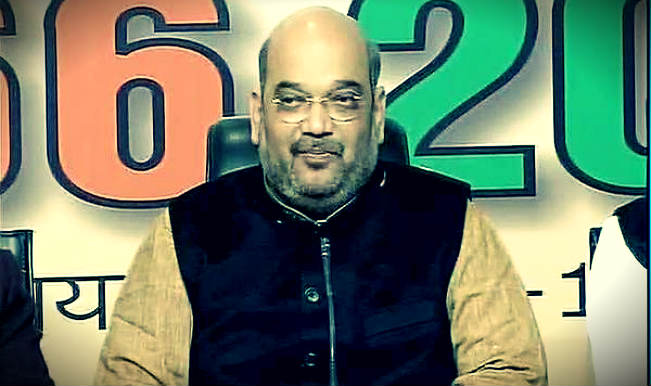 Bharatiya Janata Party (BJP) President Amit Shah on Tuesday said his party was keeping its options open in Jammu and Kashmir where no party got a clear majority. The saffron party will be forming the first single party government in Jharkhand in 14 years. Also Read - PM Modi Asks BJP Workers to Educate Farmers on 'Intricacies of New Farm Reforms' & 'Save Them From Rumours'

Addressing a press conference after party victory in the assembly elections, Shah said all the options of forming the government are open. Shah said, “BJP is open to all the options; it can form the government with someone’s support and we may also support a party to provide J  & K a stable government.” Also Read - DNA Samples of 3 Men Killed in Shopian Encounter Match With Families From Rajouri: J&K Police

BJP’s ‘Mission 44’ in Kashmir failed miserably but managed to get the maximum number of vote share as per the latest reports by Election Commission of India. BJP was leading on 25 seats following PDP which was leading the tally with 28 seats under its kitty. Also Read - Farm Bills 2020: BJP to Hold 15-Day Awareness Campaign in Seven States From Today

Shah said, “The year 2014 has been impressive for the BJP. I would like to thank the people of both Jharkhand, Jammu & Kashmir for the victory in these current elections. I want to assure the people of Jharkhand that the BJP will fulfill its promise of giving a clean and stable government to the state.”

Talking about PM Narendra Modi’s contribution in the Assembly Elections Amit Shah said, “I would also like to thank PM Narendra Modi and his government’s six-month report card  which helped the party win big in both the states.”

The former Gujarat Home Minister said that the electorate voted for good governance and development then and now too. Shah said BJP’s idealogy of contesting the elections on development agenda also helped his party win Maharashtra and  Harayana Assembly Elections.

Taking a dig at Indian National Congress (INC) party, Amit Shah said the Congress party has slipped to either third or fourth position in both Jharkhand, and Jammu and Kashmir. Shah said, “The Congress Mukt Abhiyaan has been working well and would be a reality soon.” Shah didn’t spare the newly constituted ‘Janata Parivaar’. “The Janata Parivar (SP-RJD-JDU alliance) had tried to portray a challenge by uniting prior to elections, but the people of Jharkhand rejected them.”

In Jammu & Kashmir, the BJP won 11 seats in the 2008 Assembly Elections and but as per the trends the number has increased to 25; increase of 14 seats. Despite being the second largest party, BJP has emerged as the party with largest vote share party by securing 23 per cent of votes.

Shah said BJP’s victory in the elections, “is a lesson for those (political parties) who cry secularism and try to derail the development agenda prevalent in our country since the BJP government came to power.” Shah also thanked his partyworkers for their hardwork.

When asked about the results being in accordance to Amit Shah’s expectations, Shah retorted that it (results) may have fallen short of media’s expectations, but these are absolutely according to our expectations.