PDP, the single largest party in the hung Jammu and Kashmir Assembly, today began consultations with its newly elected MLAs in a bid to find a consensus on the sensitive issue of joining hands with BJP or the Congress to form the new government in the state. 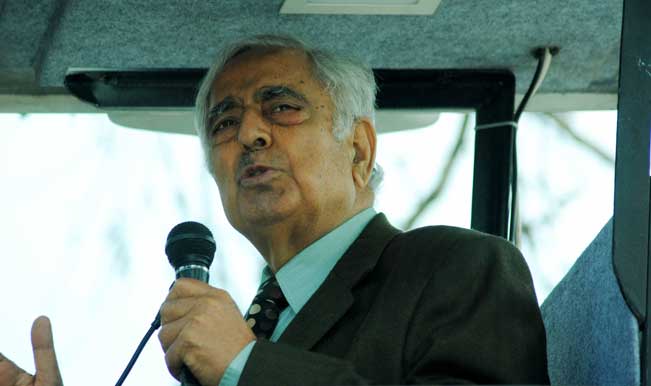 Srinagar, Dec 28: Weighing its options carefully, PDP, the single largest party in the hung Jammu and Kashmir Assembly, today began consultations with its newly elected MLAs in a bid to find a consensus on the sensitive issue of joining hands with BJP or the Congress to form the new government in the state. Maintaining that all options including an alliance with the BJP were open, Peoples Democratic Party (PDP) Chief Spokesman Naeem Akhtar said there was an informal interaction with the party’s MLAs to discuss the various possibilities on forging an alliance for government formation. Also Read - BJP Wants to Develop an Ecosystem With No Place For Democracy: PDP Chief Mehbooba Mufti

“We are in the process of forming a consensus within the party before the leadership meets the Governor,” he told PTI. The exercise to search for a consensus began against the backdrop of Governor N N Vohra setting a deadline of January 1 for PDP, which has 28 MLAs in the 87-member Assembly, and BJP with 25 MLAs to come up with proposals for government formation. Also Read - Mehbooba Mufti Not Under House Arrest, Advised Not to Visit Pulwama For Security Concerns: J-K Police

The BJP, which is making a determined bid to come to power in the state for the first time ever, has been in touch with both PDP and National Conference(NC), which has 15 MLAs, for formation of a new government. There is an intense debate within the PDP on the pros and cons of partnering BJP with a section of the party hesitant to the idea. However, another view in the PDP is that going with the BJP would be beneficial to the state which needs massive financial assistance from the Centre where the saffron party is in power.

On the other hand, PDP also has offers of support of the Congress as well as its arch rival NC who are both keen to keep BJP away from power. Congress has 12 MLAs. PDP and Congress have together ruled the state earlier but the NC’s surprise offer of support to PDP in government formation has introduced a new element in the power stakes.

Indicative of the dilemma facing the PDP is the fact that the party patron Mufti Mohammad Sayeed has not spoken a word on government foramtion publicly since the results were declared on December 23. Sayeed stepped out of his Gupkar Road residence for the first time in a week for a medical check-up.

“He (Sayeed) had an eye surgery some time back and had gone for a follow-up check-up,” Akhtar said. Senior Congress leader Ghulam Nabi Azad said the Congress has given support to PDP and NC also has given its support to it. “Now, PDP has to decide whether it wants to go with the BJP or with Congress or NC or independent candidates,” he said. PDP had yesterday set tough conditions for BJP which is wooing it for the formation of the new government in the state, declaring that its stand against revocation of Article 370 of the Constitution (special status to J-K) was “non-negotiable”.

Vohra had on Friday sent separate letters to PDP and BJP, inviting their respective leaders — Mehbooba Mufti (PDP President) and Jugal Kishore Sharma (state President of BJP) for discussions over government formation before January one.