Jammu and Kashmir Chief Minister Mufti Mohammad Sayeed says, ‘No option other than talks with Pakistan’

Asserting that there is no option other than talks with Pakistan over Kashmir, Jammu and Kashmir Chief Minister Mufti Mohammad Sayeed today said Prime Minister Narendra Modi had deputed Foreign Secretary to begin talks with neighbouring country. 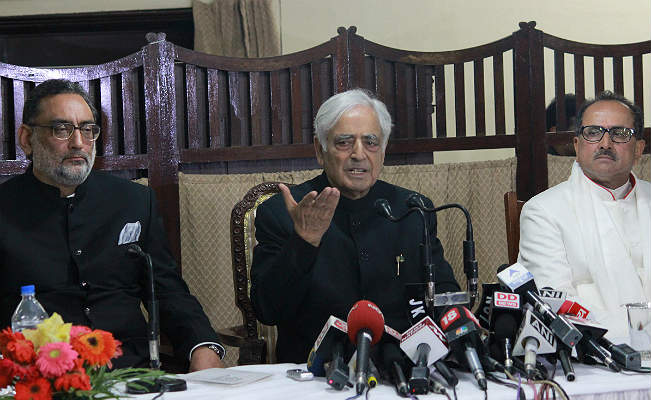 “No such assurance… There is no question of assurance. He (Prime Minister) told me when he met me that I deputed my Foreign Secretary to go there and talk. It was his first response,” Mufti told reporters when asked whether Prime Minister Modi has given him assurance on commencement of dialogue with Pakistan. Also Read - Security Beefed Up as J&K All Set to Go to District Development Council Polls Today

“It was his (PM’s) response. In my perception, there is no other option (other than holding talks with Pakistan),” he said. Mufti was addressing his first press conference after taking over as Chief Minister of the state today.

Speaking further on the issue, Mufti said, “During meeting with the Prime Minister, I gave my perspective (on the need for Indo-Pak talks). We have a stand and voice on this. We are there.

“Our voice will be heard as we are democratically elected government. There is track-2 (for dialogue with Pakistan). What will happen if some of our people go there and hold talks. I do not thing it is controversy. In any case we are part of the government.”

On the PDP-BJP alliance, the chief minister said, “BJP has mandate of the people of India and Modi is elected PM. It is not out of compulsion that I have gone in alliance with BJP but this alliance is out of conviction. I see future in this alliance.”

Mufti said that peace was the prerequisite for carrying out any development-related activities in the state. “I had told the Prime Minister that external and internal dimensions need to be addressed, we have to make Jammu and Kashmir a model of development, a model of good governance and for this peace is prerequisite,” he said.

Referring to Sajjad Lone joining as Minister in state government, Mufti said, “In democratic process, I will say that my perception is that neither it will held by bullets nor grenades, the thing will be resolved by talks. After 2002, the faith of the people in democratic institutes have increased”.

“The example is coming of Sajjad Lone. Yes, Sajjad has taken an initiative and its for the others to see and take a decision. They have seen other options,” he said. On the issue of accountability of security forces and reopening of old cases, he said, “Machil Fake encounter case is before you–punishment was given. We will make them accountable. We will not allow them to do mistake”.

On the self rule, Mufti said, “It is evolutionary process. It is not sudden. It is connected mostly to cross-border initiatives. There is neither banking facilities, telephone facilities and no exchange of students. You can make these LOC points as Wagah border“.

“What is motive of self rule… To reopen more routes between two sides. There is cross LoC travel and trade, it is important,” he said. He ruled out reports that BJP General Secretary Ram Madhav has said that there is no consensus on some issue.

Invoking former prime minister Atal Bihari Vajpayee, Mufti said he was a statesman who displayed patience in the face of adversity. “Even during the Kargil war and after the attack on the Parliament when our forces and the Pakistani army were facing each other eyeball to eyeball, Vajpayee displayed remarkable patience and not a single bullet was fired on the border,” he said.

Referring to his previous government, Mufti said during his tenure as chief minister, Vajpayee had extended a hand of friendship towards Pakistan. “We had said that ‘na bandook sai na goli sai, baat banay gi boli sai (Neither with a gun nor with a bullet reconciliation can be reached with dialogue), and it was Vajpayee who extended a hand of friendship towards Pakistan,” he said.

Mufti said that in the CMP that his party formed with Congress in 2002, he had requested the Centre to initiate unconditional dialogue with the people of Kashmir. Describing Jammu and Kashmir as the most diverse state in the country, Mufti said that the people of the state did not believe in the ideology of the founder of Pakistan, Mohammed Ali Jinnah.

“Kashmir was the only Muslim majority state to stay with India and during my tenure as chief minister we gave full empowerment to Jammu,” he said. “History has given us an opportunity, since 1947 whoever has remained the prime minister of India, Kashmir issue continues to stare them. We want to make this alliance a turning point in the history of Kashmir,” he said.

He said that his government would provide a transparent and accountable government to the people.