Jammu and Kashmir Lockdown: Resumption of Physical Hearing of Court Cases in J&K, Ladakh from August 2

The authorities on Friday decided the resumption of physical hearing of court cases in the UT of Jammu & Kashmir and UT of Ladakh from August 2.

Jammu and Kashmir: The authorities on Friday decided to resume the physical hearing of court cases in the UT of Jammu & Kashmir and UT of Ladakh from August 2. “In continuation to the earlier order dated 30.06.2021 on the subject, Hon’ble the Chief Justice has been pleased to order that in view of the considerable decline in Covid-19 infection cases in the Union Territories of Jammu & Kashmir and Ladakh, the litigants shall be allowed entry into the Court premises with effect from 2nd August 2021, to enable them to meet their counsel in their chambers. However, their entry into the Court Buildings shall continue to be prohibited till further orders,” the order reads.Also Read - Navratri 2022: Holy Shrine Of Vaishno Devi Gears Up To Welcome Pilgrims This Festive Season | All You Need To Know 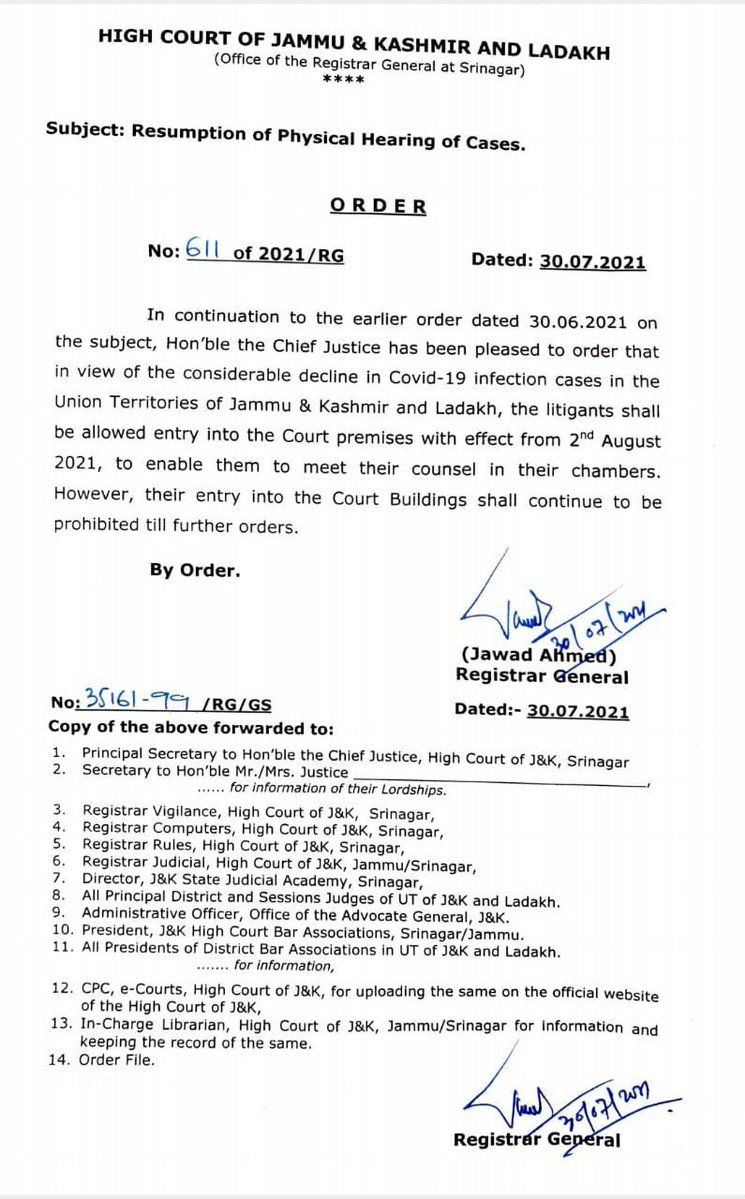 Jammu and Kashmir recorded 137 fresh COVID-19 cases on Friday, taking its infection tally to 3,21,344, while the death toll rose to 4,378 as one fatality was reported in a span of 24 hours, officials said. Fifty-eight cases were reported from Jammu division and 79 from Kashmir division of the union territory, they said. Also Read - Two Migrant Labourers Shot At By Terrorists In Kashmir’s Pulwama, Critically Injured

The officials said Srinagar recorded the highest number of 26 new cases, followed by Baramulla district with 15. The number of active cases now stands at 1,171 in the union territory, while 3,15,795 patients have recovered from the disease so far, they said. There were 35 confirmed cases of Mucormycosis (black fungus) in the union territory at present, the officials added.