Jammu and Kashmir State Assembly Election Results 2014: Even coming second will be an achievement for BJP

If final results actually shape according to the exit polls it certainly will be an achievement for BJP. 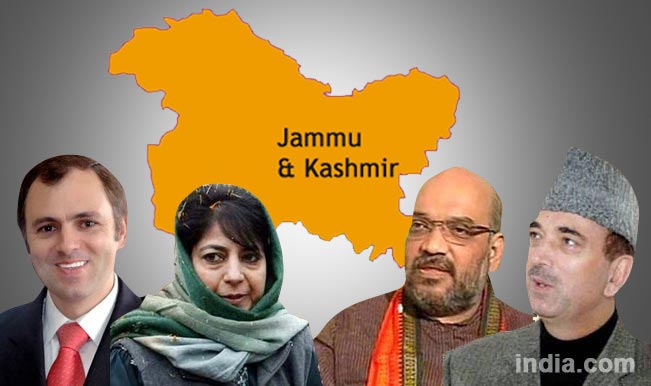 When exit poll results of various agencies were out, People’s Democratic Party’s (PDP) emergence as the single largest party in the Jammu and Kashmir Assembly elections 2014 was no surprise. What came across as a revelation was the name of Bhartiya Janata Party (BJP) as the runner-up. If final results actually shape according to the exit polls it certainly will be an achievement for a party, which in last elections was stuck at number four with just 11 seats. (Read: Jammu and Kashmir Assembly Election 2014: All you need to know about the poll battle of the valley) Also Read - Tejasvi Surya Controversy: Govt Asks Twitter to Remove Bengaluru MP's Tweet Linking Terrorism to Islam

Going by the exit polls BJP’s much fancied Mission 44+ seems to be an improbable one, but then there is no clear winner as well and even sitting in an opposition will be a triumph. Not only this, BJP will quite easily zip past National Conference, one of the regional parties and Congress. BJP’s rise will mostly be determined by two factors- A) Timing of the elections and B) Power at centre. Both these factors are correlated. Also Read - J-K Panchayat Polls 2020: National Conference Demands Removal of Roadblocks Ahead of Elections

With elections held soon after the September floods, which saw ruling coalition Government of NC and Congress being carped everywhere for not reaching out to the needy people during the natural disaster, thereby people lost faith in them. This loss in faith could largely have converted votes against NC and Congress rather than in their favour. At the same time BJP’s presence in the centre (read Modi-wave) could have lured voters to vote for them instead of the other regional parties.

Following BJP’s success in the General Elections and widespread rallies in Jammu division of which Narendra Modi’s was spearhead it can be said Modi-wave will engulf the winter capital and things could really shape in their favour., but it remains to be seen whether it can open an account in the valley, which holds the majority of seats, that is 46 out of 87.

It is understandable that with Hindu Majority in the Jammu division BJP can dominate and same can be said for PDP in the Valley, which has highest number of Muslim voters. It could be a direct confrontation between PDP and BJP and may come down to Independent Candidates, of whom many as per the grapevine are believed to cling onto the BJP (again due to presence at centre). With final result barely some hours away, the real picture could well throw in some surprises, but if BJP at least holds to second position that no doubt will be an achievement for the Saffron party, which almost was invisible in the Valley’s politics till now.