Student politics in two internationally-known universities - DU and JNU - have surprised many this time round. While the right-wing ABVP expanded its hold in JNU 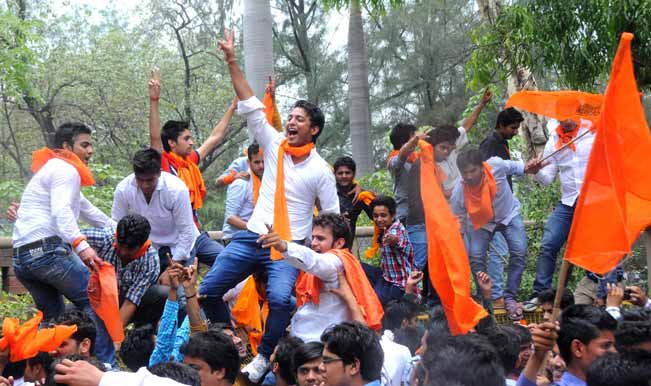 New Delhi, Sep 21: Student politics in two internationally-known universities – DU and JNU – have surprised many this time round. While the right-wing ABVP expanded its hold in JNU, a campus dominated by left politics, the radical leftist AISA increased its vote share in DU, giving close competition to traditional organisations. Also Read - Delhi University First Cut-off List 2020: Know Here When it Will be Released | Latest Updates

Started in 1990, the All India Students’ Association (AISA), affiliated to the Communist Party of India-Marxist-Leninist, is going strong in Jawaharlal Nehru University (JNU), but its vote share has been steadily going down. But it is in Delhi University (DU), where the students body elections are bitterly fought between traditional rivals, the Akhil Bharatiya Vidyarthi Parishad (ABVP), a student body of the Rashtriya Swayamsewak Sangh (RSS), and National Students’ Union of India (NSUI), the Congress students outfit, that the AISA has put up a good show, stunning many. Also Read - Delhi University Admissions 2020: St Stephen’s College Declares First Cut-Off, 99.25% For Economics Hons

For the ABVP, DU continues to be its home turf as it bagged four seats in the students union (DUSU), although after 18 years. But in JNU, where its presence was inconspicuous, it has gained ground. While its vice presidential and general secretary candidates secured second position in the Jawaharlal Nehru Student’s Union (JNUSU), its president and joint secretary candidates came third – a fact that has never happened in the university’s history.

Also, its councillors’ share has increased to 12 out of the 31 in different departments as against last year’s six of 26. Established in the early 1970s, JNU has always been a left stronghold and has given many Left leaders to the nation but now the influence seems to be waning.

“I think now the students are fed up with policies of the left organisations. The left groups do not talk about students issues while ABVP has always struggled for their rights. Like in the larger political front, the Left is losing their hold in West Bengal and Kerala, so the same thing is happening in JNU too,” ABVP national secretary Rohit Chahal told IANS.

ABVP was founded in 1948 and has a strong base in universities of Delhi, Himachal Pradesh and Rajasthan. “An increase from six to 12 in councillors’ posts is, I think, very remarkable. The organisations with anti-national ideology do not have anything new to offer and this has helped ABVP gain,” claimed Chahal, in a reference to Left-affiliated student groups.

The oldest and once influential Students’ Federation of India (SFI) maintains that ABVP has gained in JNU this year because a supportive government is in power. “ABVP has been strong in science departments and with NDA coming to power, they got an added advantage,” SFI’s presidential candidate Pindiga Ambedkar told IANS. SFI, affiliated to Communist Party of India-Marxist, is confident they will bounce back.

“We have performed much better this time than last year. Our vote share has grown by above 600 and then we have six councillors too. We suffered a little due to the split that occurred in 2012. However, we will revive,” added Ambedkar. Interestingly, DU is seeing the rise of AISA whose vote share has grown from 3,000 earlier to over 10,000 this year.

The group, which still does not have a presence in all 50 colleges affiliated to the varsity, was successful in giving tough competition to once-powerful NSUI. “A few years ago, AISA was a distant group which was not capable of influencing students’ mindset dominated by caste politics. But our polemical association with Anna Hazare’s anti-corruption movement in 2011 was the first breakthrough and got us the spotlight,” AISA’s DU president Sunny Kumar told IANS.

So in tandem with the movement, the student group started two other campaigns “Student Youth against Corruption” and “Student Youth Rights Movement” to give students “a platform to engage with national politics”. Moreover, their participation during the Dec 16 gang rape protests in the national capital helped the group expand its reach. “We were so vociferous in our protest that we were able to get representation even in the (J.S) Verma committee that was constituted after the gang rape to spell out safety measures for the women. Since then students and others believe that we can usher in change.

“With the rise of the Aam Aadmi Party (AAP), students feel that they can also have their say and be part of politics that is clean and can usher in change in society,” added Kumar. Rajesh Jha, a political science professor in DU. however attributes AISA’s rise to ultra-left teachers appointments.

“It is important to see growth of AISA in the light of teachers’ appointments by the university. In the last five to six years, over 2,500 teachers with left leanings have been appointed. These teachers obviously want a student group that they could work with during times of crisis… that is how AISA became so prominent,” Jha added.