For once, ‘Truth alone triumphs’ would sound like a perfect phrase for the current scenario as J Jayalalithaa is finally convicted after an 18-year long trial. 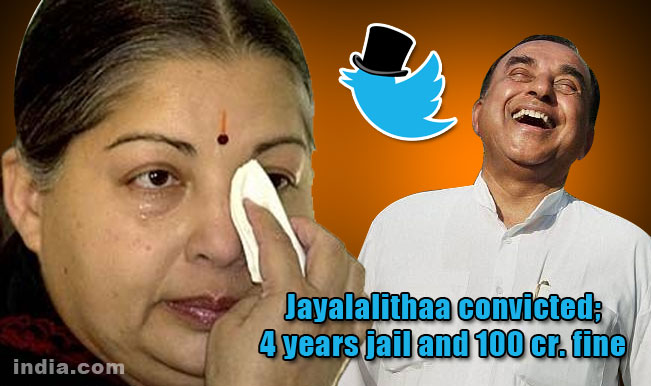 Jayalalithaa is convicted in the graft case and is served a sentence of four years in jail with immediate legal effect. It means that Jayalalithaa should be taken into custody instantly. The bail for the same can only be filed in the High Court and with High Court on vacation the days are tough ahead for ‘Amma’. Not only does a four-year jail-term await her, but she has also been slapped with a fine of 100 crore. Also Read - ECB Terminates Players' Contracts For The Hundred

Only couple of weeks back, Jayalalithaa had filed six defamation suits against Dr Subramanian Swamy. The battle between Swamy and Jayalalithaa is out in the open for long. Now that the judgement is out, the Twitterati like always is abuzz with the recent developments. We bring to you some of the most amazing reactions on the social media below:

“Who the hell gets convicted for 66 crores? You are an insult.You don’t know how to do proper corruption”~ Sharad Pawar to Jaya #Jayaverdict

Not only 4 years of imprisonment, but JJ has also got a punishment of Rs 100 crore. That’s a victory against corruption. #Jayaverdict

Judciary proves that no guilty can escape the laws of the land. It won’t bow down to any pressure. #proudoflegalfraternity #Jayaverdict

@Swamy39 Law looks worthy only when verdict is not altered to suit individuals.Victory for all law-abiding citizens.Historic #Jayaverdict.