About 65.46 per cent electorate today exercised their franchise in the second of the five-phase polling for the 20 Maoist-hit Assembly constituencies as the day passed off peacefully. 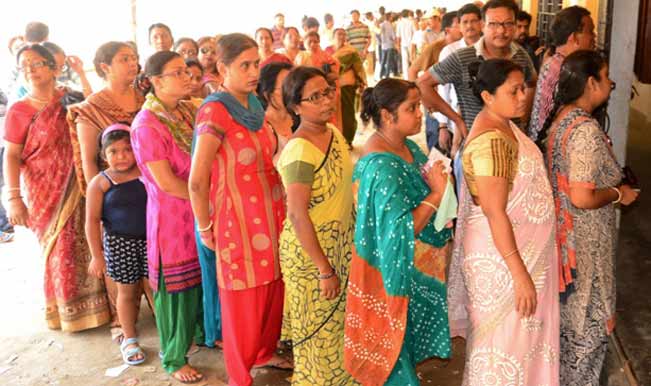 Ranchi, Dec 2: About 65.46 per cent electorate today exercised their franchise in the second of the five-phase polling for the 20 Maoist-hit Assembly constituencies as the day passed off peacefully. Chief Electoral Officer P K Jajoria said, 65.46 per cent votes were cast in the 2nd phase polling. In the first phase polling for 13 seats on November 25, 61.92 per cent voters exercised their franchise. Stating that the gradual increase in the turnout would strengthen democracy, Jajoria said the polling concluded peacefully in all the constituencies. (Read: Jharkhand Assembly Elections: All you need to know) Also Read - Amarinder Singh Condemns Haryana Govt's Attempts To Prevent Farmers March To Delhi

The fate of 223 candidates, including former chief ministers Arjun Munda and Madhu Koda, three incumbent ministers and 18 sitting MLAs, was sealed in the EVMs. Prominent among the candidates include Dulal Bhuyan (Congress) from Jugsalai, Jaba Manjhi (JMM) from Manoharpur, Neil Tirkey (JMM) from Simdega and Bandhu Tirkey (Trinamool Congress) and Bimla Pradhan (BJP), both from Simdega. The CEO said all the constituencies were alerted following the Maoist attack on the CRPF personnel in the neighbouring Chhattisgarh yesterday. Also Read - Congress Leader Ahmed Patel Laid to Rest in Gujarat’s Bharuch, Rahul Gandhi Attends Funeral

“Some of the polling personnel have been brought back by helicopter while others will return tomorrow morning,” Jajoria said. The 20 Maoist constituencies where polling was held today are spread over seven districts — Seraikela-Kharsawan, West and East Singhbhum, Khunti, Simdega, Ranchi and Gumla. Polling was held from 7 AM to 3 PM in 18 seats while the exercise was carried on till 5 AM in Jamshedpur (East) and Jamshedpur (West). Re-polling at a booth in Garhwa and two in Chhatarpur seat also ended incident-free.

With 76 per cent polling, Jagannathpur witnessed maximum turnout, Jajoria said. Polling for third phase of elections in 17 seats will be held on December 9 and the two remaining phases would be held on December 14 and 20. Jharkhand Assembly is a 81-member house.