Jharkhand registered an overall 66 percentage turnout for the 81 assembly seats that was held in five phases and spanned over nearly four weeks which concluded with the polling held for 16 seats in the last phase today which recorded around 70.42 per cent polling. 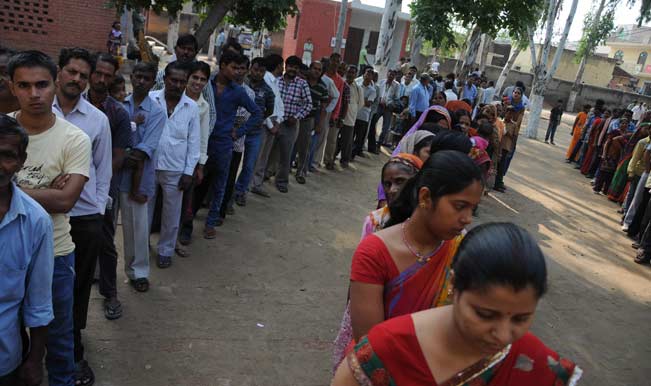 Ranchi, Dec 20: Jharkhand registered an overall 66 percentage turnout for the 81 assembly seats that was held in five phases and spanned over nearly four weeks which concluded with the polling held for 16 seats in the last phase today which recorded around 70.42 per cent polling. “Overall 66 per cent polling has been registered in the five-phase elections, an increase of nine per cent from the previous 2009 elections,” Chief Electoral Officer P K Jajoria said at a press conference. Also Read - 36-Year-Old Sadhvi Gang-Raped at Gunpoint in Jharkhand Ashram, Prime Accused Arrested

This 66 per cent polling in five phase election is a record in Jharkhand as the state has not recorded so high polling in any election – assembly or Lok Sabha before after the creation of the state, the CEO said. The fifth and final phase of polling for 16 seats ended peacefully today with no reports of any incidents, recording a massive 70.42 per cent polling. The figures could be updated later, EC officials said. Also Read - After Man Gets Trampled by Elephants in Jharkhand's Gola, Villagers Spend Nights on Trees

Counting is slated for December 23. Lauding the police personnel and election staff for successfully carrying out the elections in all the phases, Jajoria said free, fair and peaceful conduct of elections is a matter of pride for Jharkhand. The CEO also commended the voters for turning out in large numbers, saying that they have become aware of the value of vote and its impact on development. Dumka Deputy Commissioner Harsh Mangla said the polling in all the constituencies under the district today concluded peacefully.

The BJP and the JMM had yesterday accused each other of beating up their respective activists in Dumka and other areas respectively on Thursday night with the BJP registering an FIR against Chief Minister Hemant Soren and his brother Basant in connection with the incident.
In the 5th phase polling today, a total of 36,90,069 electorate, including 17,84,486 women, were eligible to choose from 208 candidates, including 16 women nominees, for the 16 seats spread over 6 districts of Dumka, Godda, Sahebganj, Jamtara, Deoghar and Pakur in Santhal Pargana region.

The polling began at 7 am and ended at 3 pm. Prominent among those in the fray in the final phase were Chief Minister Hemant Soren from Dumka and Barhait, Assembly Speaker Shashank Sekhar Bhokta from Sarath and Rural Works Minister Lobin Hembrom from Borio. Ruling JMM had won nine of the 16 seats in the 2009 assembly polls. The EC said it had marked as many as 833 polling stations as hyper-sensitive and 1,496 sensitive and 291 polling stations were made available with web casting facilities in last round of the elections.

A total of 22,240 polling personnel were deployed for the polling. A senior security official reportedly said that security deployment in Jharkhand was three to four times more than it was in the Lok Sabha elections.