BJP is all set to form the first majority government in Jharkhand as per the Jharkhand State Assemble Election 2014 results. 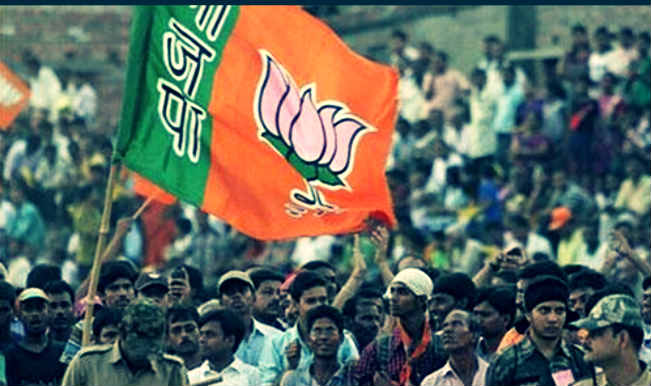 Madhu Koda, former chief minister who has been charge sheeted by CBI in the coal blocks allocation scam, is trailing by 10,082 votes behind Niral Purty of JMM at Majhgaon. Koda’s wife Geeta is, however, leading by 682 votes at Jagannathpur over her nearest JMM rival Mangal Singh Bobonga of JMM. Minister in the outgoing assembly Annapurna Devi of RJD is leading from Kodarma.

Minister in the outgoing assembly Annapurna Devi of RJD is leading from Kodarma. Congress is leading in just two – Barhi and Barkagaon and RJD in three, including Kodarma and Manika, the EC added. BJP had got its share of 32 legislators in the 81-member House after the creation of Jharkhand on November 15, 2000 and formed a government with the support of JD (U)and some other parties.

It’s number rose to 33 after Babulal Marandi won a by-poll from vacant Ramgarh seat after becoming the first Chief Minister of Jharkhand. The party’s tally slightly came down to 30 seats in the first assembly elections held in the state in 2005. The 2009 Assembly elections, however, saw its numbers reduced to 18.

JMM had also won an equal number of 18 seats in the last assembly elections while Congress had won 14 seats. AJSU had won five seats in 2009 polls.

After the exit of some leaders from these parties and the new ones joining them, the current strength of the outgoing Jharkhand Assembly is; BJP-17, JMM-15, Congress-10, JVM-04, RJD-05, Ajsu-05, JDU-2, Trinamool Congress-2, CPI-ML-Liberation-one, Marxist Coordination Committee-one, Jai Bharat Samanta Party-one, Jharkhand Party-one, Independent one, besides one nominated MLA.