On Wednesday, JNUSU had put posters on social media announcing "JNU open for Shelter" and called victims of Delhi riots to get shelter in the campus.

New Delhi: After the Jawaharlal Nehru University’s Students’ Union (JNUSU) called for providing shelter to the Delhi riot victims inside the campus, the varsity administration has asked the student body to refrain from such activities and issued a warning. Also Read - Delhi Violence: All 69 People Who Filed ex-Gratia For Damage Will Receive Amount Tomorrow, Says Kejriwal | Highlights

Confirming the same, JNU VC, Jagadesh Kumar told ANI, ”Have advised students that please don’t give such open calls. Instead, they can collect essential items from campus &provide humanitarian help to ppl.” Also Read - Delhi Violence: 'What Will we Eat if we Don't Earn', Hungry For Three Days, 60-Year-old Rag Picker Killed Despite Police's Claims of Peace

Jagadesh Kumar,JNU VC on reports that JNUSU gave open call to those affected in #NortheastDelhi violence to take shelter in campus:Have advised students that please don't give such open calls. Instead, they can collect essential items from campus&provide humanitarian help to ppl pic.twitter.com/a3Po48gUZ2

Registrar Pramod Kumar too warned of disciplinary action against students found involved in any such efforts and said, “JNUSU has no legal right to make the JNU campus a ‘shelter’. You are strictly advised against any such activity failing which appropriate disciplinary action will be taken against you.” 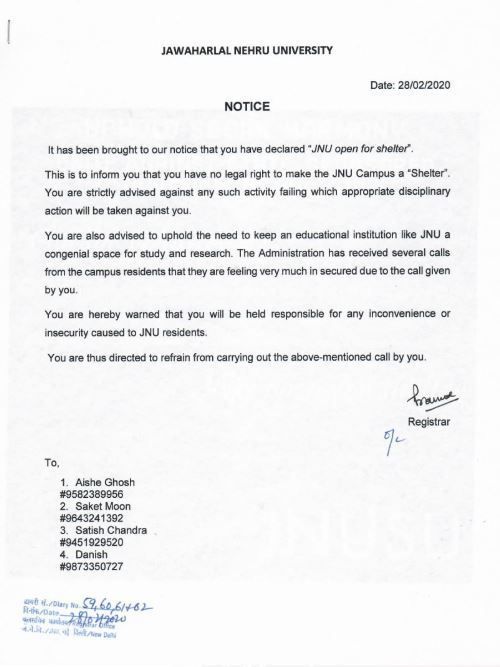 The move comes after many campus residents said they were feeling insecure due to the call given by the JNUSU.

The administration asked the students to keep JNU restricted to space for ‘study and research, highlighting that the JNU residents felt threatened by it.

On Wednesday, JNUSU had put posters on social media announcing “JNU open for Shelter” and called victims of Delhi riots to get shelter in the campus.

We urge you to volunteer for the rescue teams which are working all over Delhi.
JNUSU Office is open for everyone who needs shelter.
Contact us. pic.twitter.com/UTHjh6s5lu

Soon after the warning, the Vice-President of JNUSU, Saket Moon tweeted,

While the JNU Admin's masters in the government burned Delhi, the JNU Admin threatens us to turn survivors of the violence from our campus. JNU was open for shelter in 1984, it shall remain open today! pic.twitter.com/lZ1AvltRBA

More than 42 persons lost their lives and more than 150 people sustained injuries in the violence that started on Sunday.