JNU administration also released a statement and said that it feels great pain&anguish for the students who have sustained injuries in the violence.

New Delhi:  Violence swept the Jawaharlal Nehru University on Sunday evening as several masked miscreants  attacked students who were protesting against the fee hike. The incident took place at around 5 PM when students were holding a march, claimed reports. Several faculty members, who were reportedly trying to protect the students were also injured in the violence. All of them are undergoing treatment at AIIMS Trauma Centre. Also Read - JNU Violence: 'I Have Been Bleeding,' Watch How Masked Goons Attacked Students, Teachers in Campus

The miscreants with wooden and metal rods entered the Sabarmati hostel and brutally attacked the Students’ Union Preisdent Aishe Ghosh. She was reportedly hit over the eye with an iron rod. “I have been brutally attacked by goons wearing masks. I have been bleeding. I was brutally beaten up”, she told reporters. JNUSU General Secretary Satish Chandra was also injured in the attack. Also Read - JNU Violence: 'Fascists in Control of Our Nation', Rahul Gandhi, Oppn Train Guns at Govt - Here's Who Said What

Following the violence, heavy police force was deployed in the campus after request from the varsity administration. Joint commissioner of Police (South Western range) Devendra Arya, while speaking to reporters said that all hostel areas have been secured and police deployment has been done at strategic points.

“At present, no violence is reported from any part of the campus. Today evening, a fight occurred b/w two groups in which few students were injured and property was damaged. JNU Administration requested police to enter University to restore peace. The situation inside the campus is normal. Extensive flag march conducted by police. All hostel areas have been secured. Police deployment has been done at strategic points”, news agency ANI quoted Arya as saying.

Meanwhile, Union Home Minister Amit Shah ordered the Delhi Police to take all necessary action to control the situation in the prestigious varsity. He also ordered an inquiry into the matter.

According to officials, Shah spoke to Delhi Police Commissioner Amulya Patnaik. “Union Home Minister has spoken to Delhi Police Commissioner over JNU violence and instructed him to take necessary action. Hon’ble minister has also ordered an enquiry to be carried out by a Joint CP level officer and asked for a report to be submitted as soon as possible,” the Home Ministry said in a tweet.

JNUSU, ABVP Train Guns at Each Other

While JNUSU accused RSS’ student wing Akhil Bharatiya Vidhyarthi Parishad (ABVP) for the rampant violence, the latter on the other hand claimed that its members were attacked by students affiliated to various Left-wing students’ organisations in JNU.

Releasing a statement, the ABVP claimed that around 25 of its members have suffered serious injuries and 11 are missing. “ABVP members have been brutally attacked by students affiliated to Left student organisations–SFI, AISA and DSF. Around 25 students have been seriously injured in this attack and there is no information about the whereabouts of 11 students. Many ABVP members are being attacked in hostels and the hostels are being vandalised by the leftist goons,” claimed Durgesh Kumar, president ABVP JNU, in a statement.

Emergency in JNU. Leftist goons of JNU accompained with their cadre from other universities have crossed every limit. They have proceeded with unimaginable violence on ABVP activists of JNU. @ABVPVoice#RED_TERROR_IN_JNU#Red_Violence #LeftAttacksJNU pic.twitter.com/TrQFWkIuZN

Condemning the attack, JNU Teachers’ Association issued a statement and held the university administration ‘singularly’ responsible for this grave situation. “The JNUTA condemns the orgy of violence that was unleashed in JNU today with the connivance of the JNU Administration with the police standing by as mute spectators. Mobs not only went around hostels attacking several students, severely injuring many of them. A JNUTA meeting called to appeal for peace on campus was also attacked by a mob of masked people with stones and sticks. A teacher suffered head injuries and had to be hospitalized. The cars of several teachers were also smashed”, the statement read.

It added,”The JNUTA holds the JNU Administration singularly responsible for this grave situation. It is a product of its desperation in the light of it’s failure to resolve the crisis created by its high handed imposition of a fee hike. Students have been on an agitation for over 70 days and the VC’s obstinacy has prevented any resolution.”

IIT-Bombay also extended supoort of JNU students and asserted that such act of terror has no place in any civilised world. “We, IIT Bombay for Justice would like to extend full support and solidarity with faculty and students of JNU who have been subjected to unprecedented violence and terror in the evening of 5th January 2020 at the hands of hooded-armed mobs. The attack on innocent students and the teachers engaged in the movement against fee hike and CAA and NRC is unprecedented in history and horrifying in its barbarity. Such act of terror has no place in any civilized world least of all in the sphere of learning. We at IIT Bombay feel this terror more keenly as we have also been part of similar movement against fee hikes in IITs and unconstitutional and communal CAA and NRC. The thought that we could very easily have been in their place haunts our minds. We condemn this dastardly act on the most severe terms possible”, the statement issued by IIT-Bombay read. 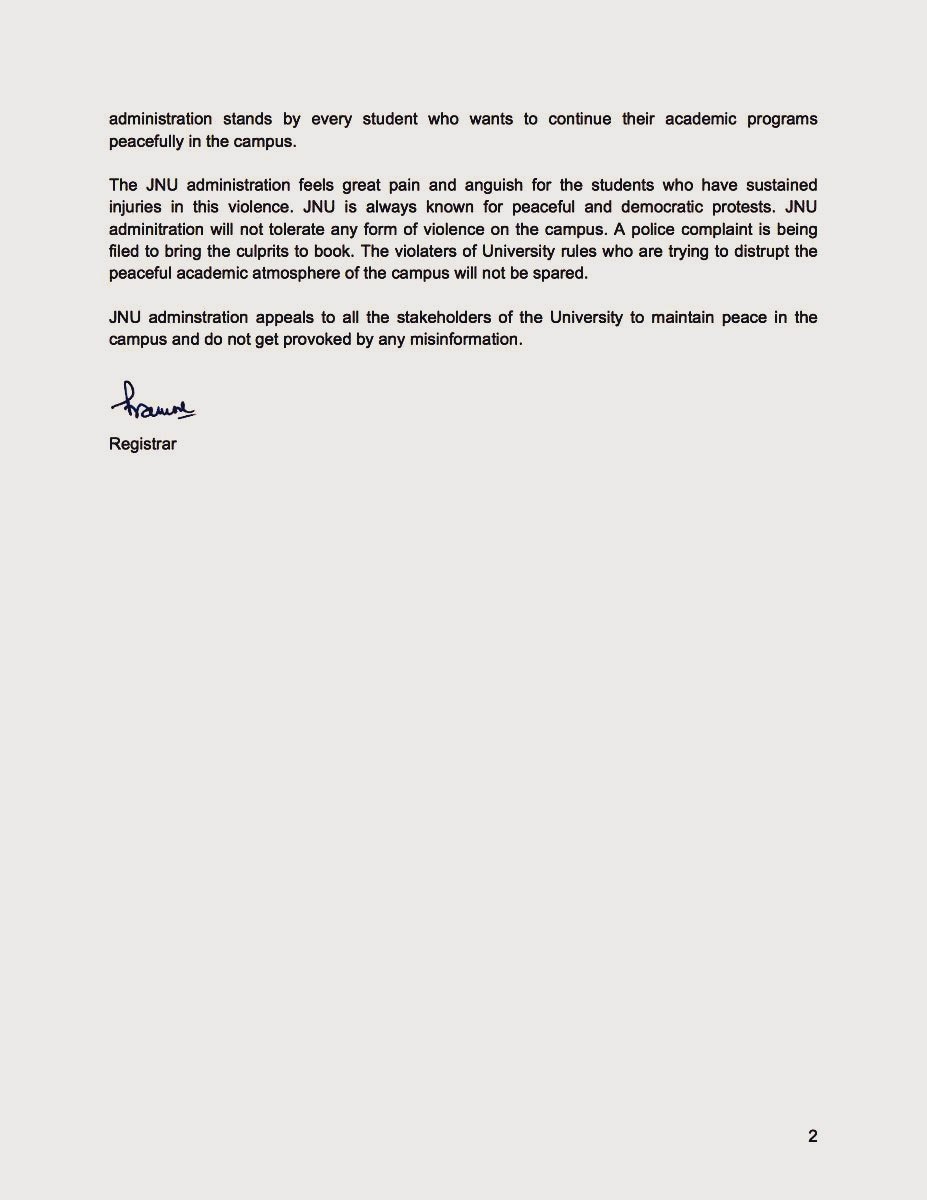