elangana Information and Technology Minister K.T. Rama Rao on Thursday said the government was 'concerned' about the worsening heat wave conditions which have claimed over 1,300 lives in the state and in neighboring Andhra Pradesh. 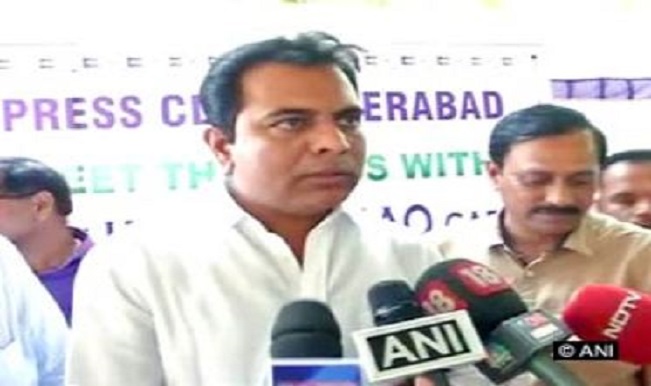 Hyderabad, May 28: Telangana Information and Technology Minister K.T. Rama Rao on Thursday said the government was ‘concerned’ about the worsening heat wave conditions which have claimed over 1,300 lives in the state and in neighboring Andhra Pradesh. “I don’t think the state or Centre can do anything about it, as it is a natural calamity. But at the same time, the state is very concerned and I believe we have already received some questions and concerns from the union health minister. We are seized of the matter and we will definitely respond to it,” said Rao. (Also read: Heat wave: Toll over 1300 in Telangana, Andhra Pradesh) Also Read - Top News Headlines From Andhra Pradesh & Telangana: CM Rao Suffers Chest Infection; NIT Warangal Distributes Over 100 Free Laptops; more

When asked about what could the Centre do about the situation, the minister said in a tongue-in-cheek remark, “If they can bring rain quickly, that’ll be a good thing.” The scorching heat wave has claimed the lives of 218 more persons in Andhra Pradesh and Telangana, taking the total death toll to 1,345 in the two states. Most of the victims are either elderly or labourers suffering from sunstroke or dehydration. Also Read - Telangana Govt School Students Make 'Zero Waste' Sanitary Napkins, Call It 'Stree Raksha Pads'

Authorities have cancelled doctors’ leave and advised people not to go outside in the middle of the day to avoid the worst of the heat, but for many people staying indoors is not an option. The weather conditions have also resulted in frequent power cuts. Blamed on dry continental air blowing in from Iran and Afghanistan, the heat wave is forecast to subside later this week before monsoon rains bring relief to parched areas of the east and south.