Kargil Vijay Diwas 2019: Why Vajpayee Announced The Success of ‘Operation Vijay’ in Advance

The Government of India had recruited approximately 200,000 Indian troops to fight. A total number of 527 soldiers of the Indian Armed forces lost their lives during this war. Pakistan lost its 700 men.

New Delhi: India is celebrating the 20th anniversary of the ‘Kargil Vijay Diwas‘ — which marks the victory of the India Armed Forces over Pakistani infiltrators in 1999. ‘Kargil Vijay Diwas’ is celebrated every year across the nation to pay tribute to the brave-hearts of the armed forces who sacrificed their lives to re-capture all positions in Kargil that were seized by Pakistan 18 years ago.Also Read - Earthquake of Magnitude 5.3 Hits Jammu-Kashmir; Another Jolts Kargil, Ladakh: NCS

“On Kargil Vijay Diwas, a grateful nation acknowledges the gallantry of our Armed Forces on the heights of Kargil in 1999. We salute the grit and valour of those who defended India, and record our everlasting debt to those who never returned. Jai Hind!,” President Ram Nath Kovind tweeted on 20th anniversary of the ‘Kargil Vijay Diwas’. Also Read - Atal Bihari Vajpayee Death Anniversary: President, PM Modi Pay Tributes at Former PM's Samadhi Sthal

The Kargil war, which took place between May and July of 1999, began with the infiltration of both Pakistani troops and terrorists into Indian territory.  Their aim was to sever the link between Kashmir and Ladakh, and cause Indian forces to withdraw from the Siachen Glacier and force India to negotiate a settlement of the Kashmir dispute. Also Read - Shershaah: Captain Vikram Batra's Brother Vishal Batra Says '10-12 Per Cent Liberty' Taken by Sidharth Malhotra's Film

The Pakistani troops and terrorists placed themselves at key locations which gave them a strategic advantage during the beginning. After getting information from local shepherds, the Indian Army ascertained the points of incursion and launched ‘Operation Vijay’.

It has been said thar the conflict was orchestrated by the then Pakistan army chief General Pervez Musharraf without the knowledge of the then Pakistan PM Nawaz Sharif. The former Pak PM had claimed that he first learnt about it after a call from his then Indian counterpart Atal Bihari Vajpayee.

The Government of India had recruited approximately 200,000 Indian troops to fight. A total number of 527 soldiers of the Indian Armed forces lost their lives during this war. Pakistan lost its 700 men.

‘Atal Bihari Vajpayee had announced the Victory in Advance’

The then Prime Minister Atal Bihari Vajpayee had announced the victory in advance during a public rally in Haryana. Brig MPS Bajwa (retd) had revealed the same during the third Maj Gen KS Bajwa Memorial-Regiment of Artillery War Experiences Talk.

‘Vajpayee announced victory in advance, would’ve been embarrassing if we failed. It would have been very embarrassing (if things happened otherwise). However, we won later,” he had disclosed a couple of years ago. 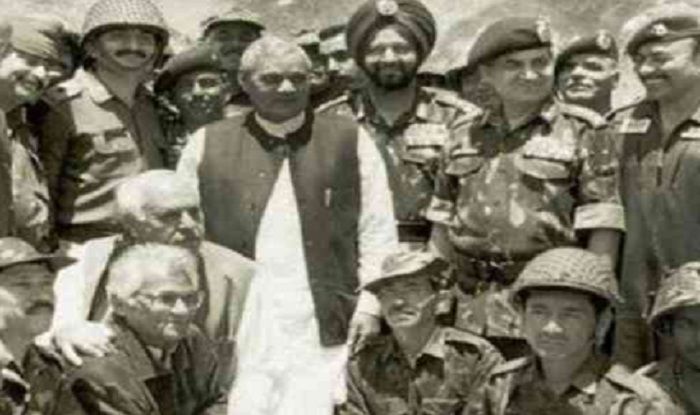 A number of events has been planned by the Army in Delhi and Dras in Jammu and Kashmir to highlight the stories of valour by brave soldiers and rekindle the pride among the youth of the country, inspiring those who were too young and those who were not yet born, to form part of the nation’s resolve.. In the national capital, the celebrations started on July 14 with the illumination of a ‘Victory Flame’ from the National War Memorial, which traversed through 11 towns and cities to finally culminate at Dras where the flame would be merged with the eternal flame at the ‘Kargil War Memorial’.

The torch relay team would conduct educational and patriotic talks and will interact with the prominent personalities and students in various educational institutes, the Army said in a statement.

The events, include expeditions by the units, which participated in the Kargil War, to their respective battlefields at super-high altitude locations such as Tololing, Tiger Hill, Pt 4875, and special national integration camp for NCC cadets hailing from various states and Union territories of the country.

The 20th anniversary of the Kargil victory is being celebrated with the theme ‘Remember, Rejoice and Renew’, the Army said. “We ‘remember’ our martyrs, by revisiting the sacrifices and instilling pride and respect among us, we ‘rejoice’ by celebrating the victory in Kargil and we ‘renew’ our resolve to safeguard the honour of the tricolour,” the Army said in a statement .

Furthermore, it added, the Kargil War will always be remembered for its strategic and tactical surprises, the self-imposed national strategy of restraint in keeping the war limited to Kargil-Siachen sectors, and the swiftly executed tri-services military strategy and plans