Karnal Kisan Mahapanchayat: Haryana Police said that the traffic might be hampered and advised the motorists to avoid traveling on the national highway (NH) 44 between Delhi and Ambala.

Karnal Kisan Mahapanchayat: Security has been tightened in Haryana’s Karnal, in the wake of Kisan Mahapanachayat which has been convened to protest against the August 28 lathi charge on farmers. The farmers will gather at the grain market of Karnal and take out a protest march on NH 44 before proceeding towards the mini-secretariat. “There is no outcome from the meeting with the Karnal administration. We will ‘gherao’ the mini-secretariat as per our plan,” Bharatiya Kisan Union (Haryana) President Gurnam Singh Chaduni told the media yesterday. Haryana Police said that the traffic might be hampered and advised the motorists to avoid traveling on the national highway (NH) 44 between Delhi and Ambala.
Also Read - Punjab: Farmers Protesting Karnal Lathicharge Block Several Roads. List Here

Farmers continued to sit in front of the mini secretariat gate in Karnal till late at night. DC Nishant Kumar Yadav, IG Mamta Singh & SP Gangaram Punia & other senior officers are still holding talks with the protesters so that some positive solutions can be found: Haryana Govt

Protesting farmers gherao vicinity of Mini Secretariat in Karnal, Haryana. “We have captured the gate, want to take some rest, no time for talks, it can happen later,” says BKU leader Rakesh Tikait.

Protesting farmers gherao vicinity of Mini Secretariat in Karnal, Haryana. "We have captured the gate, want to take some rest, no time for talks, it can happen later," says BKU leader Rakesh Tikait pic.twitter.com/RerfVT9JlV

The farmers started gheraoing the Karnal secretariat after talks failed with administration during Kisan Mahapanchayat at Anaj Mandi.

Before being taken into custody, BKU leader Rakesh Tikait tweeted that either govt concede farmers’ demands or arrest them.

17:01 PM: A call has been given by farmers to gherao the secretariat

After talks failed, the agitating farmers decided to move towards Karnal mini secretariat from grain market. A call has been given to gherao the secretariat

Talks between farmers and government officials in Karnal have been inconclusive and farmer leaders have said that they will now decide on the future course of action.

Whatever is incurred by farmers in growing crops should be ensured to them. The govt should either give a profitable price or explain to us why our demand is wrong. The current MSP is a fraud. There should be a law for MSP: Badrinarayan Choudhary,Gen Secy, Bharatiya Kisan Sangh

Bharatiya Kisan Sangh says it will hold demonstrations at district centres in the country on 8th Sept demanding profitable prices to all farmers equally.

15:01 PM: Hope a solution will come out of talks: CM Khattar

Farmers have called a meeting in Karnal & it is going on. Talk is underway with a recently formed committee of 11 members. I hope a solution will come out of talks: Haryana CM Manohar Lal Khattar

District Administration urged farmer leaders to ask mischievous elements, who had reached Anaj Mandi, Karnal with sticks, iron rods, to leave the meeting site. It appears that they aren’t listening to farmer leaders. We are warning them to not break the law, said IGP Karnal, Haryana. 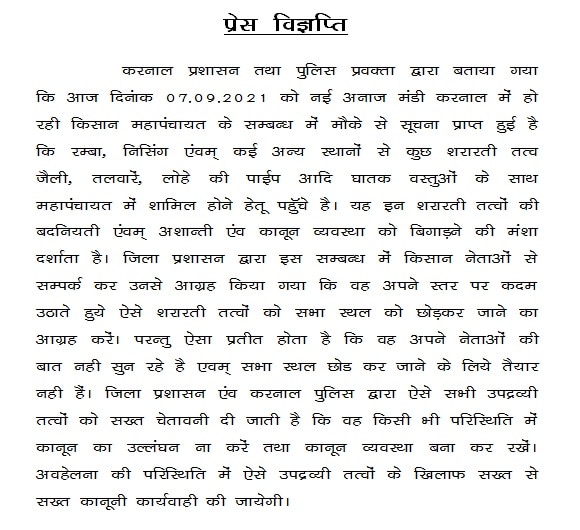 As per the reports of Times of India, the Manohar lal Khattar-led Haryana government has invited an 11-member committee of farmers to discuss the issue of Gherao of Karnal mini secretariat.

The ground intelligence report indicates that some mischievous elements armed with sticks, iron rods have reached Anaj Mandi, Karnal. District admin and police are warning such mischievous elements not to take the law into their hands & maintain public order, said Haryana Police.

I feel (Gurnam) Chaduni took extortion money from Congress to create continuous chaos in Haryana. They will continue this until some innocent farmers die. Some Haryana farmers have understood that it isn’t about farmers but is political, said Haryana Agriculture Minister JP Dalal.

11:52 AM: Reaching Karnal in Some Time, tweets Tikait

To get justice for Sushil Kajla, who was martyred in the brutal lathi charge of Karnal Police, I am reaching Karnal in some time along with the comrades of United Kisan Morcha, all of you keep an eye on Karnal, tweeted Bhartiya Kisan Union (BKU) leader Rakesh Tikait.

As per the reports, farmers have started gathering in Haryana’s Karnal for the Kisan Mahapanchayat scheduled for noon. Till 11 AM, around 250 farmers had reached the Karnal mandi, the venue for the mahapanchayat. The numbers are expected to increase in the next few hours.

The state administration has made all arrangements (for Kisan Mahapanchayat). No one will be allowed to take the law into their hands. We appeal to our farmer brothers to peacefully conduct their public meeting: Haryana Home Minister Anil Vij
10:22 AM: ‘Their Demands Not Justified’

“A meeting was held with the farmers’ leaders, but their demands were not justified. The administration will not allow them (farmers) to gherao the mini-secretariat and block the NH-44. We will deal strictly if anyone tries to take the law into their own hands”, Deputy commissioner Nishant Kumar Yadav told a portal.

District administration and police have made necessary security arrangements in wake of the Kisan Mahapanchayat. A total of 40 companies have been deployed to maintain law and order. Public activities are going on without interruption, said Ganga Ram Punia, SP, Karnal.

“We want Kisan Mahapanchayat to be conducted peacefully & conflict to be resolved through mutual conversation. We spoke with farmer leaders yesterday on the matter. Police will take action if law & order is disturbed”, Ganga Ram Punia, SP, Karnal added.

Haryana: Security tightens in Karnal ahead of Kisan Mahapanchayat. Visuals from near offices of Deputy Commissioner & SP

The state government has suspended mobile internet and SMS services in Karnal, Kurukshetra, Kaithal, Jind and Panipat to curb ‘spread of inflammatory material and rumours’. According to information from Haryana, DPR, in order to maintain law and order in the state, the government was suspending internet and SMS services from midnight Tuesday till September 7 midnight.

09:25 AM: Rain lashes parts of Haryana; visuals from Karnal where Kisan Mahapanchayat will be held later today

Section 144 of the Criminal Procedure Code has also been put in. Under Section 144 public assemblies are banned, district officials said.