The Congress on Sunday released the second list with names of 11 candidates for upcoming Karnataka Assembly Elections 2018.

Thiruvananthapuram, Apr 22: The Congress on Sunday released the second list with names of 11 candidates for upcoming Karnataka Assembly Elections 2018. In the new list, Chief Minister Siddaramaiah has replaced Dr Devraj Patil as candidate from Badami constituency. He would file his nomination from Badami in north Karnataka on April 24 between around 3 PM. He is also contesting from Chamundeshwari seat.

The list also mentions the name of KP Chandrakala who will be contesting Karnataka Polls from Madikeni seat. He has replaced HS Chandra Mouli, who is reportedly the lawyer of Nirav Modi’s uncle Mehul Choksi.

The Congress released the names of 2018 candidates for Karnataka Assembly Elections on April 15. In the list, the party had named Dr Devraj Patil as its nominee from Badami. However, issuing of B-form (required to be filed by a political party mentioning name of its approved candidate) to Patil was put on hold.

Badami with strong Kuruba presence, the community to which Siddaramaiah belongs, was seen as second safe option for the Chief Minister as reports have suggested that the battle in Chamundeshwari will not be an easy one for him. 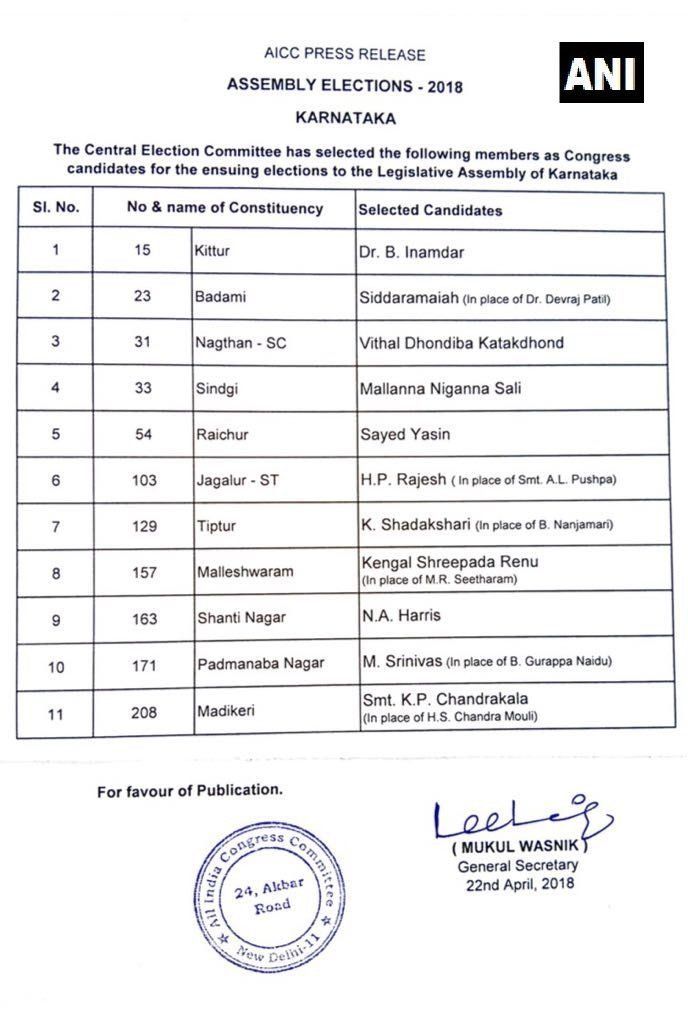 Siddaramaiah ended the suspense over contesting Karnataka Assembly Elections 2018 from a second constituency earlier on Saturday.

Polling for Karnataka Assembly Elections 2018 will be held on May 12. The counting of votes will be conducted on May 15 and the results will be announced on the same day.