New Delhi: Following a defeat of the Congress and Janata Dal (Secular) coalition in the dramatic floor test, HD Kumaraswamy on Tuesday submitted his resignation to the Governor from the post of Chief Minister of Karnataka.Also Read - 'Change In Syllabus An Attempts To Put Out Actual Facts': Karnataka Govt On Revision Of Textbooks

After teetering for weeks in many unsuccessful attempts to pacify the rebelling MLAs, the Karnataka government crumbled after losing the trust vote in Vidhan Soudha, ending Kumaraswamy‘s 14-month reign. Also Read - Young Couple Found Charred to Death in Car in Karnataka's Udupi

In his letter to Karnataka Governor Vajubhai Vala, Kumaraswamy said, “I hereby tender my resignation from the post of Chief Minister of Karnataka along with my Cabinet and request you to kindly accept the same. I take this opportunity to extend my grateful thanks for the cooperation given to me and my colleagues during my tenure.” Also Read - Arjun Singh, BJP Lok Sabha MP & Former West Bengal BJP Vice-President, Rejoins TMC

Accepting his resignation, the Governor asked him to “continue as a caretaker Chief Minister” of the state. 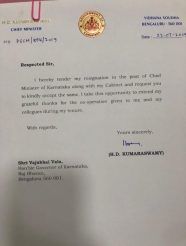 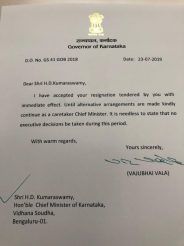 After his emotional speech, Kumaraswamy managed to get only 99 votes against 105 of the BJP. The coalition made tremendous efforts at stalling the trust vote and bring back the rebel MLAs who showed no signs of returning to the alliance.

Following his embarrassing defeat, Kumaraswamy walked out of the Assembly and headed straight to the Raj Bhawan to put in his papers.

Moments before the floor test, Kumaraswamy in his speech said that he would happily quit as the chief minister. “The other day, a channel ran a story saying we are pushing for load shedding. CM was pushing the state into darkness. Should I have become the CM to get such a certificate? Today, I am ready to quit happily,” he had said in his final speech before the voting began.

The fall of the Karnataka coalition will mark the return of the Bharatiya Janata Party (BJP) in the state. The party celebrated, calling the floor test a ‘Game of Karma’. On the other hand, Congress leaders slammed the BJP and blamed their defeat on the rebel MLAs.