But don’t blame it on the system we have. This happens in all democracies – no matter how you slice it, there will be a gap and a small percentage swing may have a huge impact.

Bengaluru, May 15: The Congress will take solace from the fact that it polled 38 per cent of over three and a half crore votes cast in Karnataka. The BJP polled 37 per cent — an impressive gain of 16 per cent but still less than the Congress. Yet, such is the brutality of the first-past-the-post system in our Westministerial model of democracy that someone with a lower percentage of the votes may actually win and win big depending on the spread and concentration of votes across the seat. How else can one explain that the BJP may end up with 111 seats, Congress 69 and the JDS, which got 17 per cent of the votes, got 40 seats. Also Read - Delhi Chalo: Rahul Gandhi Backs Protesting Farmers, Says Modi Govt Will Have To Take Back 'The Black Law'

But don’t blame it on the system we have. This happens in all democracies – no matter how you slice it, there will be a gap and a small percentage swing may have a huge impact. In 2016, Hillary Clinton won more votes but under US system of the electoral college, Donald Trump won the presidential elections by securing the 270 electoral college votes required. So popular votes are not always known to be with the winners. What the winners get are the spoils of victory. Also Read - West Bengal: Suvendu Adhikari Resigns as State Transport Minister, Cracks Widen In Trinamool Congress 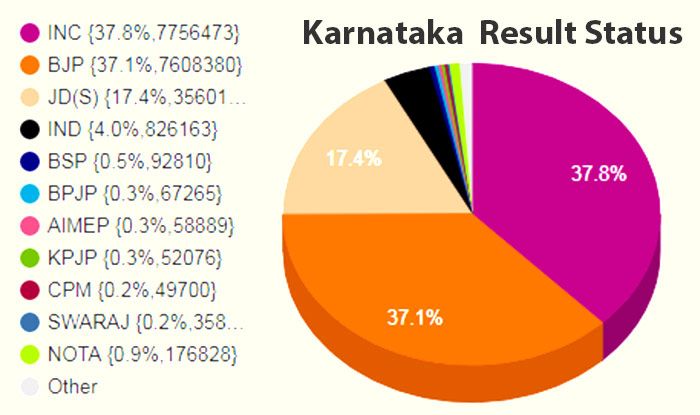 Congratulating the BJP, West Bengal Chief Minister Mamata Banerjee alluded to the arithmetic: “For those who lost fight back. If the Congress had gone into an alliance with the JD(S), the result would have been different. Very different.” Possibly – at least the vote percentage adds up and it would have turned most constituencies into two-cornered fights, where the winner would have to get nearly half the votes.

As BS Yeddyurappa heads to Delhi, ostensibly to discuss government formation in the state, Karnataka’s chief minister-designate must reflect on what has been a bitter and divisive campaign and seek to redress some of the major issues that these elections have thrown up.