Kathak Makes its First-Ever Debut at the Princeton Festival

In a true show of diversity, the Princeton Festival presented its first-ever Indian dance performance in its 10-year history.

Richard Tang Yuk, the festival’s artistic director, said, the reason behind seeking an Indian ensemble was to better reflect the diversity of Princeton, NJ.

“As we diversify, we appeal to more people and allow our regular attendees to experiment,” Tang Yuk said in a press release.

The ensemble, whose Pradhanica’s name is derived from the Hindi word for “leader” and implies “master of rhythm,” offered a modern presentation of kathak, an ancient art that began evolving into its present form during the 16th century in India’s Mughal courts.

Pradhanica is a collaboration between rhythm maestro and composer Pandit Divyang Vakil, and choreographer, dancer and tabla player Jin Won, to explore the lyrical landscape of rhythm and how it unites a dancer and musicians.

At the 11th edition of the festival, Won, known to take an innovative approach towards this ancient art, took audiences on a journey of varied emotions expressed through rhythm. 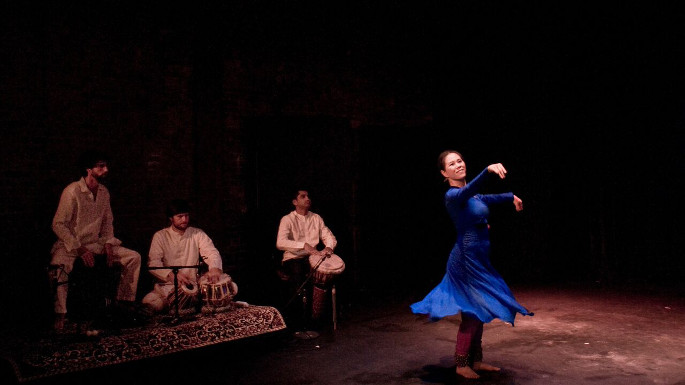 She began with pure dance or nritta, where she lived up to her name as the “Pradhanica” or female leader with her mastery over the rhythm. The split-second precision in her movements, crisp spins, and clean footwork fit perfectly with the complex, yet ear-pleasing arrangement of drumming, composed by Vakil. The combination of differing timbres played by Mike Lukshis on the tabla, Kaumil Shah on the African djembe and cajon player Vincent Pierce, accompanied by the sharpness of 100 bells worn on Won’s feet had an immensely powerful effect.

In the second section, Vakil created a score that showcased emotions—a common theme of Indian dance—through rhythm with the added effect of appropriate ragas played on the sitar by Indrajit Roy-Chowdhury. Here, Won departed from traditional dance style and attempted to illustrate feelings of joy, sorrow, anger and peace through rhythm and body movements instead of employing symbolic gestures or miming a story.

During the final section, traditional kathak was presented in a contemporary context. Flanked by dancers Geetika Bhandari and Shivali Bhammer for a portion of this segment, compositions such as baants and tukdas were performed with a contemporary theka. Towards the end, house lights were turned on, and the audience was encouraged to clap along with the theka before it turned into a fierce jugalbandi between Won and the drummers.

When asked about their favorite moment, many of the audience members referred to the jugalbandi, sharing that they “loved the back and forth dialogue between her and the drummers.” While another attendee said, she “could feel every emotion that was expressed,” referring to the second section of joy, sorrow, anger, and peace, which are four of the nine emotional states or navarasa.

“I was so impressed with Jin Won and the musicians’ amazing skills,” Tang Yuk said. “We need to educate people in this art form. I, myself learned a lot about kathak and Indian music.”