Kerala Local Body Poll Results: According to the latest figures provided by the State Election Commission, the Left front was leading in 514 grama panchayats, five corporations and 11 district panchayats. The Opposition Congress-led UDF was in the second spot, leading in over 400 local bodies. The Left front is also ahead in 108 block panchayats.

New Delhi: The ruling CPI(M)-led LDF party secured a resounding victory in the Kerala local body polls on Wednesday just months ahead of the state assembly elections next year. The opposition Congress-led United Democratic Front(UDF), which initially was seen putting up a better show in the first round of counting, appeared to have failed to make effective use of the numerous alleged scams of the Vijayan government. Meanwhile, the Bharatiya Janata Party (BJP) seemed to have made some gains, even though they have failed to do so to the desired levels of their expectations. Also Read - Exempted From Entertainment Tax Till March, Movie Theatres in Kerala To Reopen From January 13

According to the latest figures provided by the State Election Commission, the Left front was leading in 514 grama panchayats, five corporations and 11 district panchayats. The Opposition Congress-led UDF was in the second spot, leading in over 400 local bodies. The Left front is also ahead in 108 block panchayats. Also Read - Kerala Assembly Session Underway: Congress-led UDF Creates Ruckus, Stages Walkout

The Opposition Congress led UDF was leading in 375 grama panchayats, 44 block panchayats, 45 municipalities and three district panchayats. The BJP is ahead in 23 grama panchayats and two municipalities, including Pandalam, which was the centre of protests against the entry of women of the banned age group into the Sabarimala Ayyappa shrine. The saffron party was ahead in Palakkad municipality also. Also Read - Bird Flu: Kerala Announces Compensation For Poultry Farmers, Centre Deploys Teams in States | Key Points

Though the BJP could not put up a spectacular show, it still seemed to better its 2015 record, where it won 14 grama panchayats and the lone Palakkad municipality, and if the trends hold, could nearly double its seats this time. 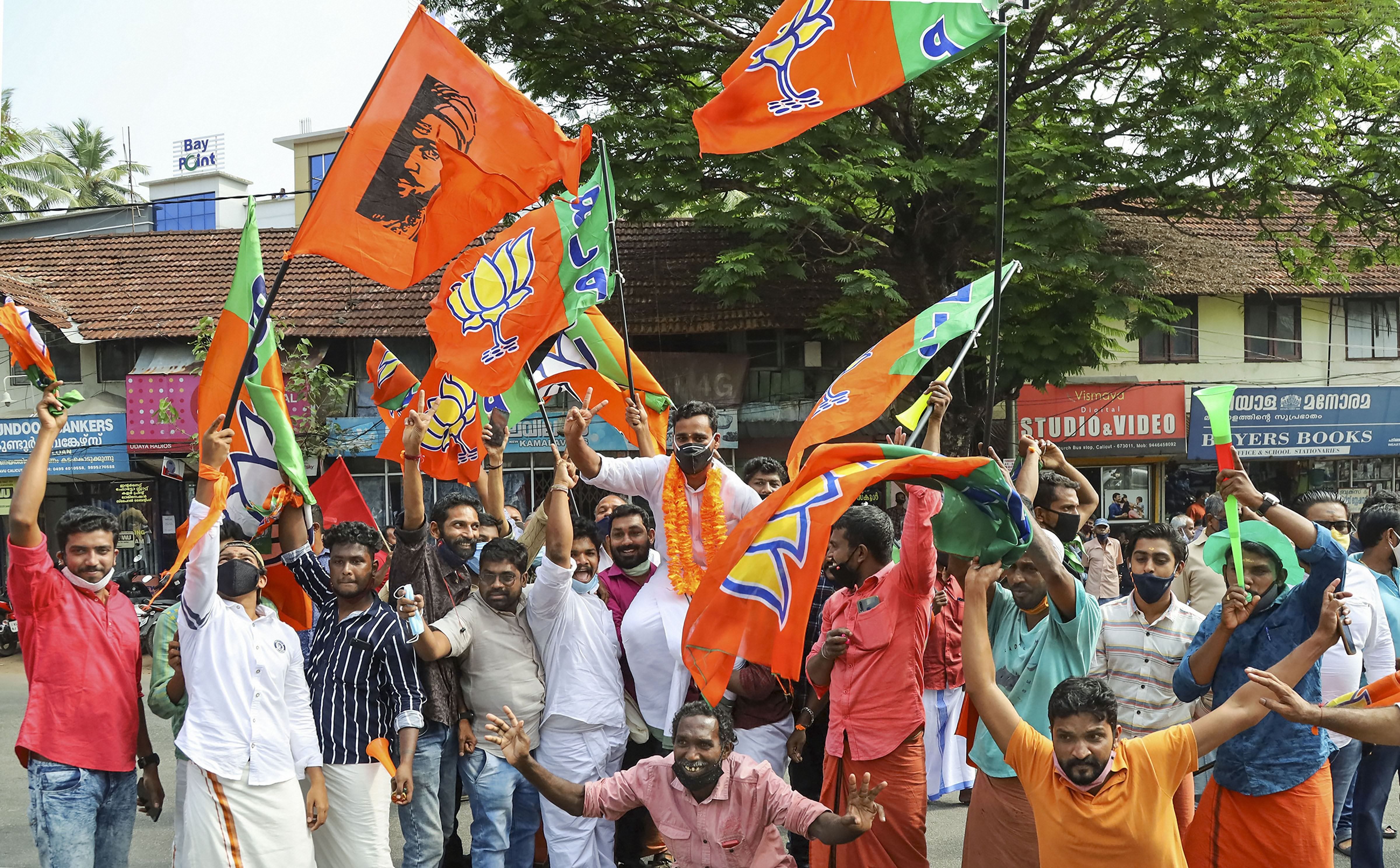 Soon after latest trends showed a comprehensive victory of the Left Democratic Front (LDF), Kerala Chief Minister Pinarayi Vijayan said that this election win is the victory of the people of the state and serves a befitting reply to those who are trying to destroy the state.

He said, “This is the victory of the people of the state. This election result are a befitting reply to those who are trying to destroy Kerala and its achievements. The efforts of those who tried to destabilise the government using central agencies have been defeated. The results have shown that UDF and it’s opportunistic politics have no space in Kerala. Congress was siding with the BJP to carry out false campaign and malign LDF. It has not succeeded.”

“In Gram Panchayats LDF was able to present a good performance. People supported LDF in a big way. Even in places, UDF had a big influence, Left was able to win. This also includes places where big leaders of Congress hold sway. This is because people have lost confidence in UDF,” he added.

He also took to Twitter to thank the people for reposing faith in the ruling front.

“Thank you Kerala. Thank you for reposing faith in LDF. We are humbled by the trust and the confidence of the people of Kerala. This is a victory for secularism and inclusive development,” he said.

The front has not lost ground in any of its traditional bastions. The front’s Political Affairs committee will be meeting on Thursday to take stock of the results, Ramachandran said, adding that the CPI(M) and the LDF need not rejoice. They had not sought votes on the development agenda, he claimed. 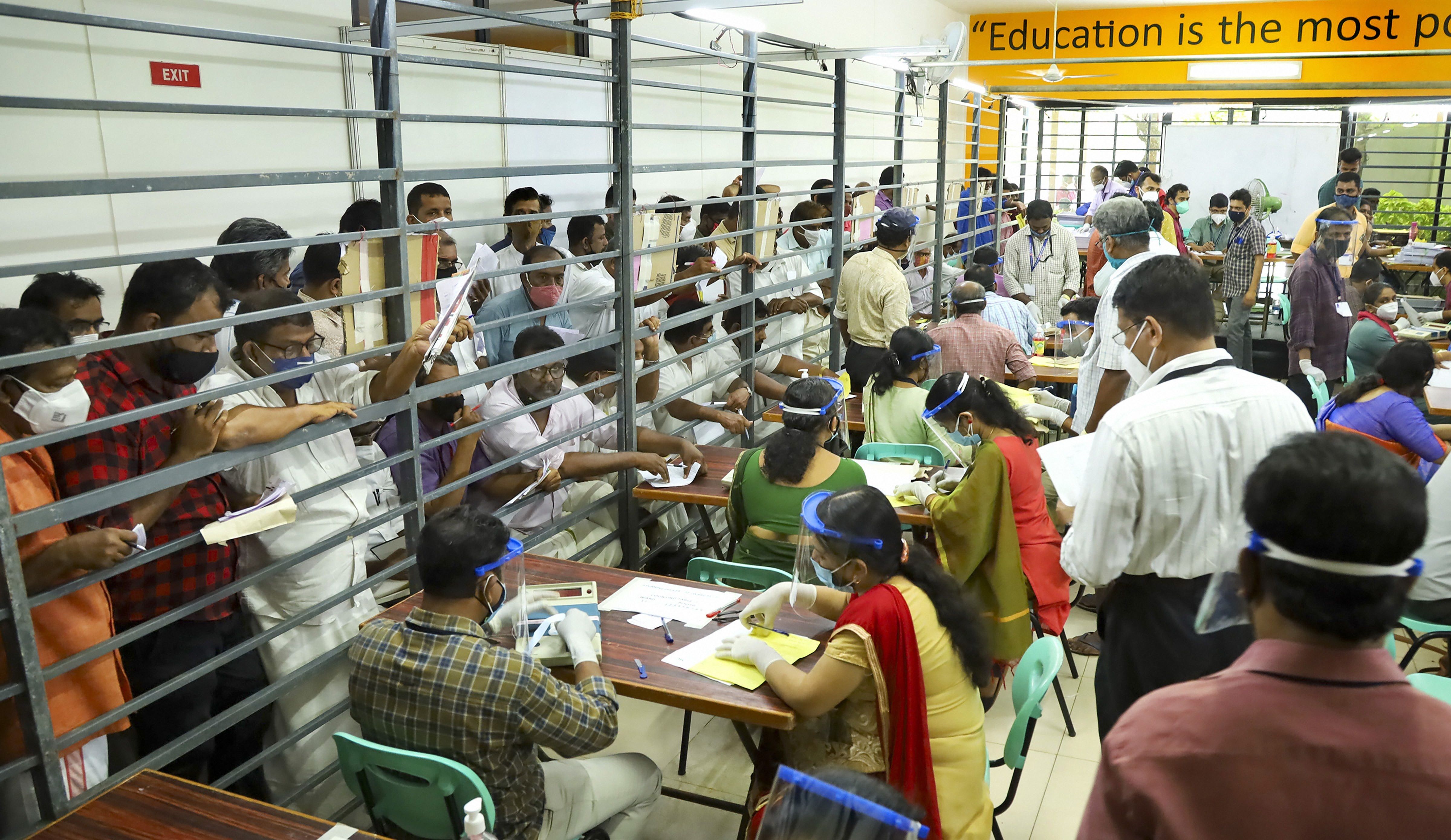 Chennithala said BJP has managed to do well only in some pockets and had failed to make any inroads and was a “total failure.”

“We have faired well in the elections. Over 375 panchayats are with us. The BJP has proved to be a total failure in the state. Even after using all the influence of central agencies, the BJP failed. Yes, we had certain issues which we will address,” Chennithala said.

“The fight against the ‘anti-people’ policies of the central and state governments will be continued. When compared with the 2015 local body polls, the UDF did better this time. It’s true that the anti-government sentiments were not seen this time. We will address the failure in each panchayat and move forward after correcting the mistakes,” he said.

“Other than in Pandalam and Palakkad, BJP has not made any impact in Kerala. We will look into the reasons behind loss of seats in Thiruvnanthapuram,” Chennithala said.

BJP state president K Surendran alleged the UDF and LDF worked together to defeat his party in Thiruvananthapuram.

The UDF vote share has gone down drastically. Many communal organisations have also helped the LDF, he alleged.

The good show by CPI(M) in Thiruvananthapuram Corporation is the result of an “unholy nexus” between the Left and the Congress, he said, adding the latter had failed in fighting the Left party. They need to introspect, he added.

The three phase Kerala local body polls was held in a total of 21,893 wards in 1,200 local self governing bodies–including six corporations, 941 village panchayats, 14 district panchayats and 87 municipalities on December 8, 10 and 14. The outcome of the polls is seen as an indicator of the public mood ahead of the 2021 assembly elections in the state.