The move comes as a counter measure to the killing of 20 Indian Army soldiers, including a Colonel, in eastern Ladakh's Galwan Valley on June 15.

New Delhi: In a massive and unprecedented development, the Centre on Monday banned 59 Chinese apps, including TikTok and UC Browser in India, in a counter measure to the killing of 20 Indian Army soldiers, including a Colonel, in eastern Ladakh’s Galwan Valley on June 15.Also Read - Ladakh Standoff: With Disengagement of Troops on Agenda, India And China to Hold Corps Commander-level Talks on Tuesday

Also Read - Amid Ladakh Standoff, India Likely to Get First Batch of 6 Rafale Jets by July-end

In a statement today, the government said that the apps were being banned ‘in view of information available that they are engaged in activities which are prejudicial to sovereignty and integrity of India, defence of India, security of state and public order’. Also Read - Ladakh Standoff: India, China to Hold Weekly Talks to Resolve Border Tensions in Galwan Valley

The list of Chinese apps banned by the Centre is as follows: 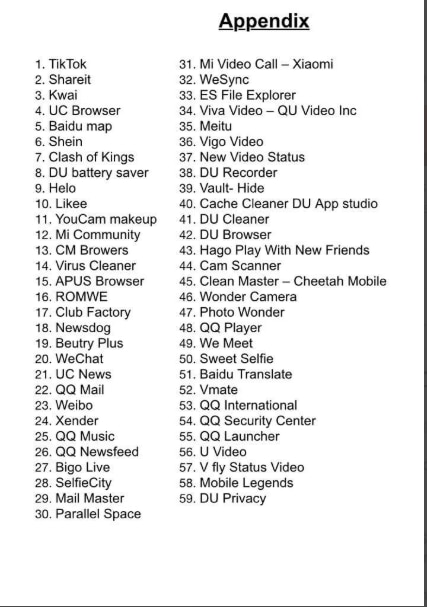 Notably, the development comes amid calls of boycott of Chinese goods in the wake of the June 15 incident. The Centre and various state governments had earlier revoked contracts given to various Chinese companies for a number of projects.

The two countries have been in a standoff in Ladakh since early May. However, tensions exploded in a spectacular and violent fashion on June 15 as Chinese troops, armed with barbed wire bats, ambushed their Indian counterparts, resulting in 20 casualties and over 70 injuries to the Indian side.

However, incensed by the killing of the Colonel, the Indian troops, too, retaliated and, despite being outnumbered, inflicted unspecified number of casualties on the Chinese. Beijing is yet to disclose the number of injuries and deaths suffered by its troops.