Ladakh Standoff: Eye For an Eye, Tooth For a Tooth – How Tensions Between India And China Escalated | SEE Map

The lex talionis of allegations between Indian and Chinese military forces have had a long history. In fact, China also does not recognise the border agreement between British India and Tibet of 1914.

New Delhi: Amid the ongoing eyeballing between Indian and Chinese troops at the Line of Actual Control (LAC) in Ladakh’s Galwan Valley region, the situation turned violent again on late Monday night. Also Read - Under Pressure From Beijing, Apple Removes Over 4,500 Games From Its China App Store

The Chinese military blamed India of attacking its troops while the Indian side claimed that the Chinese troops were attempting to trespass. Things escalated, resulting in casualties suffered by both sides, the Indian Army re-issued its statement. Also Read - 'Secrecy, Deception And Cover-Up': Donald Trump Again Accuses China of Spreading Coronavirus

While talks are underway to “defuse” the impending border crisis, let us take a look at how it all began. Also Read - 'Malicious and Unsubstantiated', Indian Army Dismisses Allegations Over Medical Facility in Leh

The lex talionis of allegations between Indian and Chinese military forces have had a long history. Archival documents from some time in 1962 show that the area on the two sides of Galwan river in Ladakh have just been a way of showing Indian dominion and setting up army posts.

In fact, China also does not recognise the border agreement between British India and Tibet of 1914. In the absence of a border treaty between the People’s Republic of China (PRC) and democratic India, the two countries have own perception of Line of Actual Control (LAC) and in certain areas, these perceptions overlap.

But how did it escalate into a standoff in Ladakh? 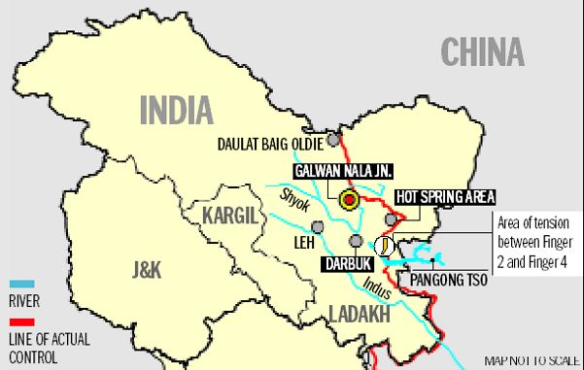 In 1962, 1/8 Gorkha Rifles (GR) troops in Ladakh went further and established a post fronting the Chinese counterpart at Samzungling. The Indian Army had been constantly surrounded by the Chinese from July that year, forcing it to eventually dispatch Mi-4 helicopters.

China saw an opportunity in October of that year, when the 1/8 GR were replaced by Alpha Company of 5 JAT under the command of Major HS Hasabnis. On October 20, 1962, China opened fire and struck the Indian posts in the Galwan Valley and the resistance went on for more than 24 hours, leading to what is known as the Sino-Indian war.

The attack made a harsh imprint that continues to shadow ties between the two nations to date.

The trigger for latest face-off in Ladakh was China’s opposition to Indian road building activity in the Finger area around the Pangong Tso Lake, the road connecting the Darbuk-Shayok-Daulat Beg Oldie in Galwan Valley.

China felt that the infrastructure development will make their strategic roads and positions vulnerable and put them at a disadvantage.

After a few scuffles at few points along LAC earlier in May, which were cases of response to transgressions, China transgressed at multiple points with a large number of troops, pitched tents and made some bunkers. Indian troops have also positioned themselves in large numbers which led to a standoff at multiple places in Galwan Area and at Finger 4 in Pangong Tso area.

This was followed by some military build-up by both sides, as they got ready for an extended standoff. Indian Army continued with infrastructure development in its own territory, during faceoff and local level talks, to support important posts like DBO and Hot spring.

While talks for de-escalation from both sides continue as China and India agreed to resolve the bilateral issues through dialogue, the situation at the border is a whole different ball game.