Fortunately school was closed due to Sunday and there were no children present at the spot except a few guards.

The school was closed on Sunday and there were no children present at the spot except a few guards. Also Read - Leopard Cub Spotted Walking in Mumbai's Aarey Forest Amid Rain, Rescued & Wrapped in Blanket | Watch

One local photographer who went near the cat to take close picture for good shots was also injured. He was rushed to the hospital with severe injuries on his left hand. Read Also: (Leopard attacks villagers in Maharashtra; video goes viral on WhatsApp) Also Read - Viral Video: Football Fans Use American Flag to Save a Falling Cat at US Stadium | Watch 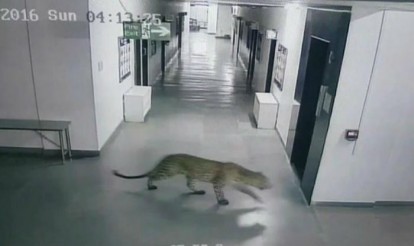 Local residents living in the area believe a major tragedy has been averted as it was Sunday.

Soon after the animal was spotted roaming in and around the school campus the authorities called forest department. School management also came to the spot.

Early report suggest that the leopard is now locked in the room near the swimming poll inside the school premises and the forest officials had reached the spot.

Last year in July, three people were injured when a leopard entered TMS school of Chikmagalur district in Karnataka. Immediately after the leopard was spotted, school officials evacuated the area and called the forest officials to nab the big catch.