Like Narendra Modi, Jharkhand Chief Minister Hemant Soren too has a humble background

While Modi became the prime minister from a tea-stall worker, Soren said he was brought up by his mother by working as a maid. 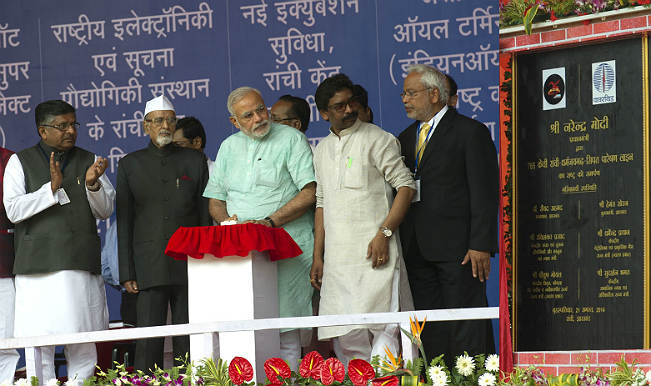 Ranchi, Aug 21: Jharkhand Chief Minister Hemant Soren today equated his background with that of Prime Minister Narendra Modi. While Modi became the prime minister from a tea-stall worker, Soren said he was brought up by his mother by working as a maid. “You (Modi) worked in a tea stall. You have reached (the PM’s chair) with patience. And my mother had been a maid, cleaning utensils at other people’s homes to bring me up. And I am now the chief minister,” Soren said to a thunderous applause from the audience. Also Read - Rare Pic: PM Modi Once Went Paragliding in Himachal's Solang Valley, Instructor Recalls The Day

The chief minister was addressing a function, where Modi inaugurated a couple of projects here. Appealing to Modi to take an aerial view over Jharkhand to see the poverty-ridden people, Soren said, “I am sure you will have misty eyes. People are drinking ‘lal pani’ (polluted water at mineral rich areas).” Appealing to the Centre to review the mineral policy to bring speedy development to the tribals, he said he believed that development would remove left wing extremism. Also Read - ‘Centre's Farm Bills Will Only Help Hoarders’: Mamata Says Will Take Steps For Interest of Farmers