The official visits are done away with. It’s showtime! Modi is all set to deliver his speech in Sydney to Indian-community diaspora here in Allphones Arena on November 17. 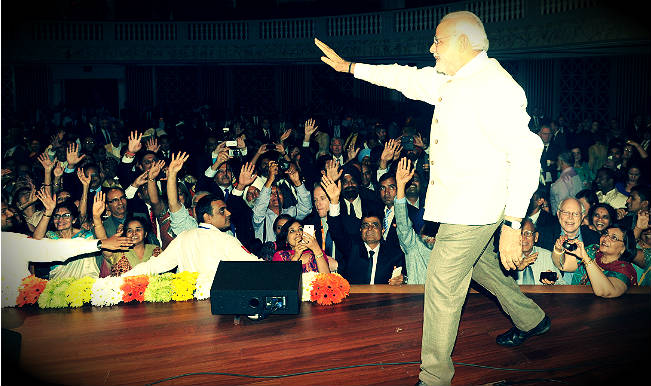 Update 14.40: Prime Minister Narendra Modi concludes his speech at Allphones Arena Sydney in Australia by saying that if anyone of you want to contribute towards the well-being of India, can write their suggestions on mygov.in. It is unbelievable to see the crowds in such huge numbers to appear even on a working day. As he leaves the arena, Narendra Modi urges the crowd to chant ‘Bharat Mata Ki Jai’.  The crowd responds in their highest spirits and Modi acknowledges the love by bowing his head in front of the 16,000 strong crowd. Narendra Modi waves his hands as he leaves the Olympic Park. Former Indian fast-bowler Javagal Srinath meets Narendra Modi before the Prime Minister makes the final exit. (Also Read: All you want to know about MyGov.in. Narendra Modi urges citizens to see the MyGov website and get involved)
Also Read - From Restoration of Article 370 to Blocking Bihar's Development: PM Modi Lambasts Opposition at First Rally in Sasaram | Key Takeaways 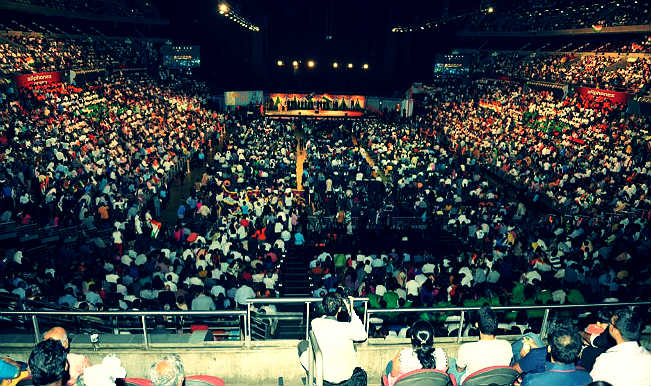 Update 14.30: January 2015 will mark 100 years since Mahatma Gandhi returned to India. And the celebratory function will  be held in Ahmedabad this time. There are several relaxations for the people of Indian origin in Australia. 1. Visa on arrival for citizens; 2. Lifetime visa for People of Indian Origin; 3. No more visits to police stations for long stay. The crowd roars a round of applause to which Narendra Modi asks Khush? Happy?

Update 14.25: Much to the excitement of audience at Allphones Sydney, Narendra Modi says “Earlier governments liked to make and amend laws in the judiciary. But my liking is to remove such old laws.” Stressing on the matter of good governance Modi said that we people have always heard of Satyameva Jayate- Truth Alone Triumphs. I have worked towards the development of ‘Shramamev Jayate’ (Dignity Of Labour).

Update 14.20: “Should we only export gems and jewellery to the world? or only potatoes and onions? Why shouldn’t we export teachers to the world?” says Narendra Modi. The Prime Minister stressed on the demand of workforce  required in coming years. Modi said, “Whatever amount of technology the world invents and innovates, but the workforce required for the same will be fulfilled by Indians only.” Talking about his government’s style of working, Modi said that our government is not only to initiate schemes and dump it on the common man, but we strive to make a ‘Skilled India’.

Update 14.10: The 64-year-old Prime Minister addressing the Indian Community in Allphones Arena in Sydney says, “Everyone dreams of doing big things. But I am here to do little things for common man. Little things that would make India a better place to live in,” said Narendrabhai Modi. Prime Minister talks about his ‘Swachh Bharat Abhiyaan’ that he initiated on October 2, Mahatma Gandhi’s birth anniversary. Modi said that it will surprise his contemporaries that he is encouraging people to build toilets and enhance the existing laggard sanitation facilities.

Update 14.00: “It was sad that the Indian community here in Australia couldn’t directly participate in the Lok Sabha Elections 2014, but there wasn’t even a single instance where you people didn’t support the poll-battle in India. I thank you people,” says Narendra Modi in Allphones Arena Sydney, Australia. I dreamed of an India where the poorest of poor person in our country is made to avail the banking services. I launched the Pradhanmantri Jan Dhan Yojana scheme. Modi shares a short story behind how he came up with the scheme.

Modi said that he went to the Reserve Bank of India (RBI) and asked about the same. RBI said, “It is possible but no one can refuse the Prime Minister! The implementation will take three years.”  Narendra Modi then asked the same to Finance Ministry. In reply to that the Finance Ministry said it will take another two years. “Then I called my PMO officials and said to them that the RBI says 3 years, finance ministry says 2 years, what do you think? The PMO said it will take 1 year. I heard suggestions made by everybody and announced the scheme on August 15 itself. I said to them that this work should be done in 150 days!”

Update 13.50: Prime Minister Narendra Modi recalls the contribution of Indian-origin sportsmen who represented Australia at various international levels. Narendra Modi says, “In 1964, an Anglo-Indian represented Australia in Olympics. The sporstsperson was born in Jabalpur, but went to represent Australia in our national game Hockey.” Modi cites another example of another sportsperson Lisa Sthalekar, who was an Anglo-Indian and played for Australia’s Women Cricket till 2013.

Update 13.45:  In the Allphones Arena in Sydney, Prime Minister Narendra Modi cites the example of Swami Vivekananda. Narendra Modi says that he believes India will again stand on its feet and help the world in curbing the concurrent crisis, it faces in the present. my six-month experience at the helm have assured me that Indians have the energy to move forward at a brisk pace.

Update 13.35: Prime Minister Narendra Modi says, “We didn’t have the pride to die for our motherland, but we have a chance to live for the country.” Narendra Modi encourages the crowd at Allphones Arena Sydney to recognise the real strength of India. Modi said that neither Australia, nor India can live without cricket. Not only cricket, but Australia  and India share a lot of cultural interests in common. Narendra Modi says, “India is a youthful nation and the Indians are full of energy, and on the basis of that I can say that India will grow to become a ‘superpower’ in the near future.”

Update 13.30: Surprise and Narendra Modi go hand-in-hand. Prime Minister begins his speech at Allphones Arena in Sydney, Australia in English and acknowledges the crowd’s applause. Narendra Modi thanks the 1.25 billion Indians across the globe and referred to them as the ones who truly deserve all the fanfare. Narendra Modi says, “Such incredible moments and this incredibly massive welcome in Sydney will take India to newer heights.”

Update 13.20: National Anthem to be played shortly in Allphones Arena in Sydney, Australia. The crowd stands to sing Australia’s and India’s national anthem simultaneously. The crowd lets out a huge cheer before the Indian National Anthem is about to be played. The national anthem is sung in a melodious chorus voice giving a feel of nationalism and patriotism equally. Prime Minister Narendra Modi to address shortly.

Update 13.10: A short documentary on Prime Minister Narendra Modi’s six-month sojourn is showed to the Allphones Arena, Sydney crowd. The video focuses on how the Narendra Modi-led Indian government stamped its authority on world map as soon as they assumed the office. The video ends with Narendra Modi seen playing drums in Japan. Several dignitaries of Australia are welcomed on-stage.

Update 13.05: Adorable Australian cricketer Brett Lee arrives on stage in Allphones Arena, Sydney with the gorgeous Tanishka Chatterjee. Brett Lee’s love for India is well known. Brett Lee with folded hands greets the crowd with the traditional ‘Namaste, Aap Kaise Ho?‘. Brett Lee is also a musician by hobby and talks about his love for India which dates back to 1994.

Update 13.00: Prime Minister Narendra Modi makes his presence felt in Allphones Arena in Sydney, Australia. Famous Bollywood choreographer Shiamak Davar’s dance troop to perform shortly showcasing the Indian-Australian cultural combo. A side of the stage is occupied by Michael Jackson-esque dancers, while the other half is occupied by traditional Indian dancers. The cultural mix is performed in a very diligent manner by the dance group.

Update 12.55: After Gujarat’s ‘Garba’, it’s time for some Punjabi ‘Bhangra’ time. The Punjabi community of Australia perform marvelous moves as they dance on peppy Punjabi numbers. Much to the crowds surprise the Punjabi troop perform Bhangra on Arijit Singh sung ‘Teri Galliyaan’. The hosts announce that Narendra Modi will arrive in few moments.

Update 12.45: The host announced that there will be a couple of more programmes before the big moment (Narendra Modi) arrives. A Sydney-based Gujarati community dance troop will perform on several desi-folk numbers. The traditional ‘Garba’ dance of Gujarat is on spectacular display as the crowd is fired up with some desi music played in the arena.

Update 12.35: The cheering for Prime Minister Narendra Modi gets louder as his soon arrival is announced. Singer Gauthami sings the “Vaishnava Jana Toh” bhajan. It happens to be one of the most popular Hindu bhajans written in 15th century by poet Narsinh Mehta in Gujarati language. The crowd in Allphones Arena, Sydney is booming with the chants of ‘Bharat Mata Ki Jai‘. One wonders if it is Pragati Maidan of Delhi or Australia.

Looking like its in mini India in Allphones Arena 🙂 #ModiInAustralia pic.twitter.com/h8lAALJD3h

After his cracking speech at Madison Square Garden (MSG) in United States of America (USA) earlier this year, the expectations around this speech have only risen. The buzz in the Indian-community based in Australia is quite astounding as everyone is gearing up to hear Narendra Modi for the first time in person.

The Olympic Park, country’s biggest indoor arena, will host as many as 16,000 guests; add to it 5,000-strong crowd watching Narendra Modi live outside on big screens. The MSG speech saw 20,000 people being hosted, and as many people were around Times Square and other places. It was reported that over 80,000 registrations had been done for 20,000 tickets.

After Rajiv Gandhi, it will be for the first time for an Indian PM to visit Australia on a bilateral visit. Australian Prime Minister Tony Abbott visited India in September earlier this year to build up for this iconic meet. Both Tony Abbott and Narendra Modi were seen sharing a cordial relationship at G20 Summit. While Abbott welcomed Modi with a warm hug, Modi described him as the perfect host.

The excitement is in the air. Not before Narendra Modi left Brisbane for Sydney, there are huge preparations to host the Indian Prime Minister. Over 200 passengers of Gujarati-Kashmiri community left from Melbourne in a train which is named ‘Modi Express’, to see Narendra Modi in action.

Love him, or hate him, but one simply cannot ignore Narendra Modi; more so if he is on the stage with a mike. The world listens. After winning the recently concluded Lok Sabha Elections with a clear mandate, countries like Japan, China, USA, and Russia are cosying up to India; vying for investments worth billions!

In a nutshell, if you watched Narendra Modi live in MSG earlier this year, you simply cannot miss this speech as well. If you missed, you’ll sure not like to miss out on this one.

After hearing Narendra Modi speak in Sanskrit, Hindi and English already; on a lighter vein, will we get to hear Narendra Modi in Gujarati too? *wink*