Lok Sabha Election 2019: Chandrababu Naidu Emerges as New ‘Facilitator’ to Forge Anti-BJP Front; Can he Bring All Under One Roof?

Naidu, who parted ways with the National Democratic Alliance (NDA) in March this year over the Centre’s refusal to grant special status to Andhra Pradesh, said that the TDP and the Congress are “coming together” to “protect the country”. The two parties have decided to go hand-in-hand in the Telangana polls and the 2019 general elections. Also Read - Didi's Scooty is Destined to Fall in Nandigram: What PM Modi Meant When he Said This

A a rival of the Grand Old Party for over three decades, Naidu termed his decision to reach out to the Congress a “democratic compulsion”. “We are coming together, to save the nation. We have to forget the past, now it is a democratic compulsion to unite. All opposition needs to be one,” he said.

This is for the first time Naidu met Gandhi since the TDP broke away from the BJP-led National Democratic Alliance (NDA). Gandhi and the TDP leader had shared the dais at the swearing-in ceremony of Karnataka Chief Minister H D Kumaraswamy in May. 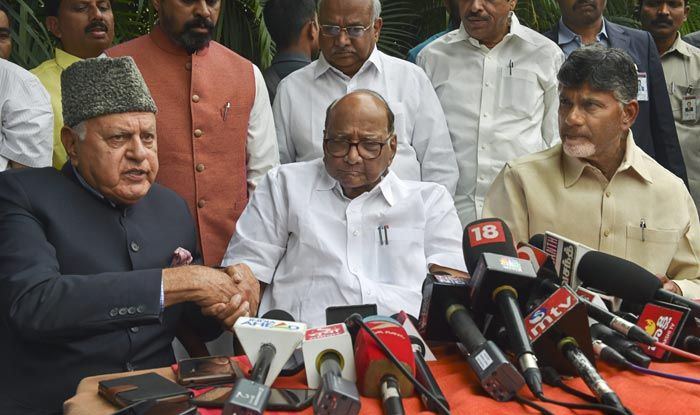 According to a TDP leader, Naidu is playing the role of a “facilitator” to bring together all opposition parties to stop the BJP juggernaut in the 2019 general elections.

Last week, Naidu had said that “political compulsions” will force non-BJP parties to come together to form a third front against the BJP.

Naidu is the latest of the opposition leaders to take the baton of forging an anti-BJP united front ahead of the Lok Sabha elections in his hands.

Earlier, UPA chairperson Sonia Gandhi had invited leaders of non-BJP or anti-BJP parties. But the attempt could not turn fruitful as several outfits have their own reservations and political ambitions that restrained them from accepting the leadership of Congress.

Telangana Rashtra Samithi (TRS) supremo and Telangana chief minister K Chandrashekar Rao (KCR) was yet another leader who had tried to unite regional parties. However, the opposition parties suspected his own political ambitions behind the move and some even doubted his intentions, saying he was working at BJP’s behest to harm the Congress.

Trinamool Congress president and West Bengal Chief Minister Mamata Banerjee also made attempts to cobble up a strong Opposition alliance against the BJP.

Surprisingly, Mamata also met veteran BJP leader LK Advani at his chamber, stating that her relations with him went back many years. “I went to meet him and inquire about his health,” she said.

However, political experts believe that her own national ambitions have made other parties sceptical about her taking the charge of construction of a third front in her hands.

But Naidu could best play the pivotal role in bringing the opposition parties together, given his experience with the Congress in 1996-98 when he brought together 19 parties under the United Front and also with the BJP-led first NDA government.

Also, talking about the prime ministerial ambitions, leaders of opposition outfits like Sharad Pawar, Mamata Banerjee and Mayawati do not consider Naidu as a contender anymore. This is because after Andhra Pradesh’s bifurcation, the state is left with only 25 seats – much lower than Maharashtra, West Bengal and Uttar Pradesh.