Her husband Rajiv, too, holds the same rank in the Army. The Kanitkars are hence the first couple in the armed forces to reach this rank.

New Delhi: Major General Madhuri Kanitkar was on Saturday promoted to the rank of Lieutenant General, thus becoming just the third woman officer and the first paediatrician to rise to the second-highest rank in the Indian Army. Also Read - Congress Leaders Hail Supreme Court For Announcing Permanent Commission For Women in Army 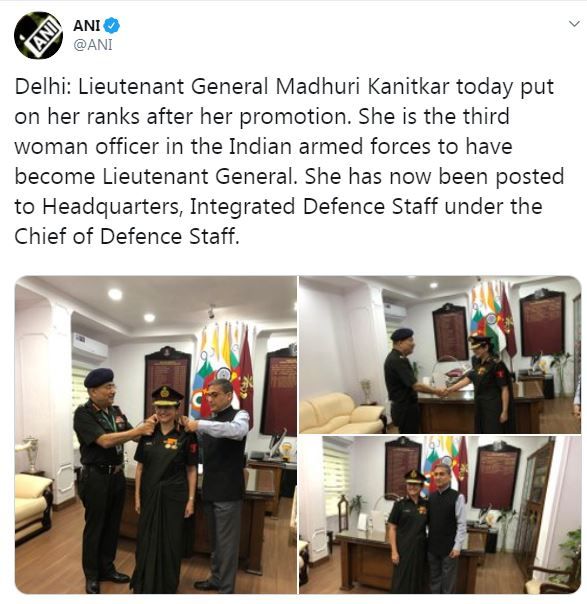 The development is also significant as it comes on the heels of the recent Supreme Court judgement directing the government to grant permanent commission to all women officers within three months.

Lt. General Kanitkar, whose husband Rajiv, too, holds the same rank in the force, has been in the Army for 37 years. She has been posted as the Deputy Chief of  Integrated Defence Staff (DCIDS), Medical (under the Chief of Defence Staff) in New Delhi.

The Kanitkars are now the first couple in the armed forces to reach this rank.

A topper at the Armed Forces Medical College (AFMC), Pune, Lt. General Kanitkar was selected for this rank last year but assumed the rank only today due to a vacancy. She is also a former and the first woman dean of the AFMC and, since last year, had been serving as Major General Medical at the Northern Command of the Army in Udhampur.

She is also a member of the Prime Minister’s scientific and technical advisory board.

Three-star rank refers to the second senior-most position in the three branches of the armed forces, i.e Lt General in the Army, Air Marshal in the Air Force and Vice Admiral in the Navy.