Madhya Pradesh Bypoll Result Live Updates: The BJP needs to win at least eight of the 28 seats to retain power and attain a simple majority in the 230-member Assembly, whose effective strength is 229.

The Bharatiya Janata Party (BJP) needs to win at least eight of the 28 seats to retain power and attain a simple majority in the 230-member Assembly, whose effective strength is 229. Also Read - Madhya Pradesh Bypolls: Over 66.28%  Voter Turnout Recorded Till 6 PM, 1 Hurt in Violence

The MP bypoll results are also crucial for former chief minister Kamal Nath, who lost power in the state seven months ago when a section of Congress MLAs revolted against him after Scindia quit the party and joined the BJP. The counting is being held in 19 districts where the by-elections were held on November 3.

Here are the Live updates for Madhya Pradesh Bypoll Results 2020:

1:00 am: Addressing a late night presser,  Deputy Election Commissioner Ashish Kundra said, “Apart from two seats in Madhya Pradesh, all results of by-elections have been declared.”

7:45 pm: Speaking to ANI, BJP leader Jyotiraditya Scindia said, “I am a worker of Bharatiya Janata Party. I am thankful to the people of the State for giving a clear mandate in favour of the party. Results have proven that Kamal Nath and Digvijaya Singh are the traitors.” 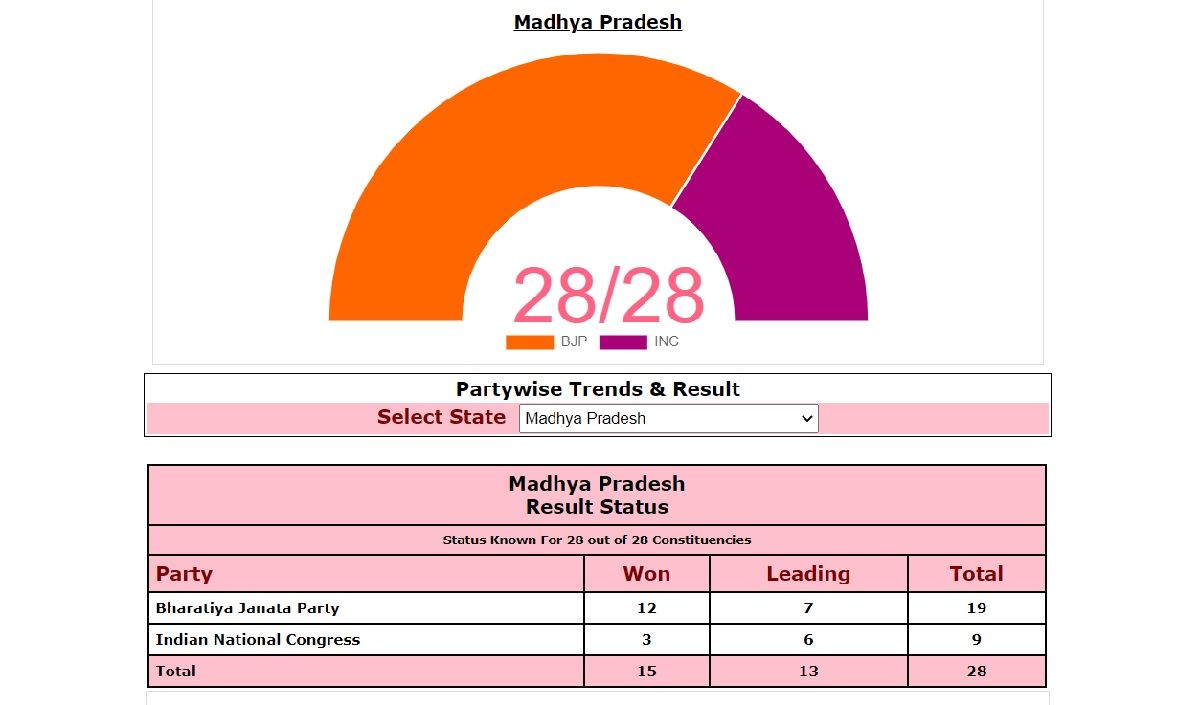 5:15 pm: Madhya Pradesh Chief Minister Shivraj Singh Chauhan tweeted a video clip saying the bypoll results is a “victory of BJP idealogy” and also credited Prime Minister Narendra Modi. He further said that the state BJP will continue to work for its welfare and development and it is a victory of this trust.

4:45 pm: Congress leader Digvijaya Singh raises doubt on EVMs. Speaking to ANI, Singh said, “EVMs are not tamper-proof, and selective tampering is done. There are seats that we would have not lost in any circumstance but we did by thousands of votes. We’ll hold a meeting tomorrow & analyse the results.” 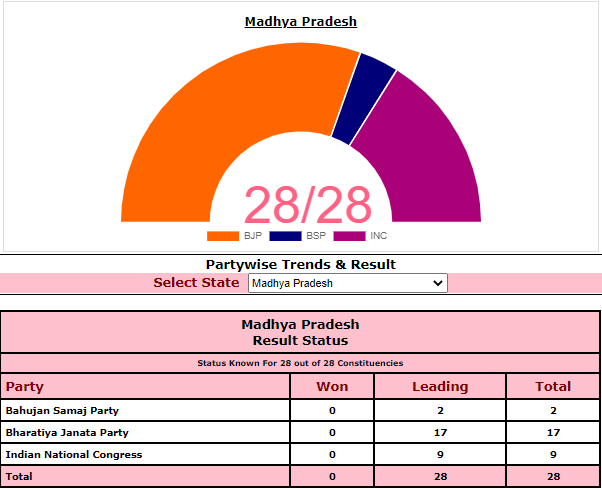 11.25 am: The BJP is leading on 17 seats while the Congress is ahead on 9, according to the trends released by the Election Commission. The Bahujan Samaj Party is leading on one after 3 hours of counting. Trends of 27 out of 28 assembly seats have appeared, so far.

11.00 am: The BJP needs to win only eight seats in the Madhya Pradesh bypolls to safeguard the Shivraj Singh Chouhan’s government, and the saffron party is already leading in more than double the number.

8.30 am: Counting of votes for MP bypolls underway. 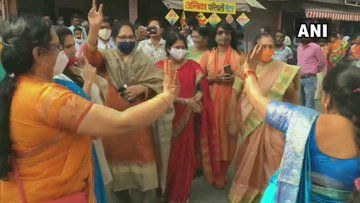 The Election Commission’s guidelines regarding COVID-19 are in place so that counting agents do not assemble in large numbers at the counting centres, he said.

A candidate, his poll agent and counting agent can remain present in the counting hall, as per the EC’s instructions.

“Results can be displayed from the control unit on a big screen as per the EC’s directives,” the official said.

Despite the COVID-19 pandemic, a total of 70.27 per cent voter turnout was recorded during the bypolls which were contested by 355 candidates, including 12 ministers.

Madhya Pradesh: Counting of votes for by-polls in 28 assembly seats to begin soon; Visuals from a counting centre in Indore pic.twitter.com/5tbFnz2KYK

The average voting percentage in the 2018 Assembly polls in these 28 constituencies, most of them in the Gwalior-Chambal region, was 72.93 per cent, the official said.

For the first time in Madhya Pradesh, bypolls have been held in as many as 28 Assembly seats in the 230-member House in one go.

The by-elections to 25 of these seats were necessitated as the sitting Congress MLAs resigned and joined the BJP. They contested the bypolls as BJP candidates.

In the remaining three Assembly segments, bypolls were held due to demise of the sitting legislators.

The BJP currently has 107 MLAs, while the Congress has 87 legislators in the House.