A senior BJP leader told that they were keen Modi addresses over 30 rallies- nearly 20 in Maharashtra and 8-10 public meetings in Haryana. 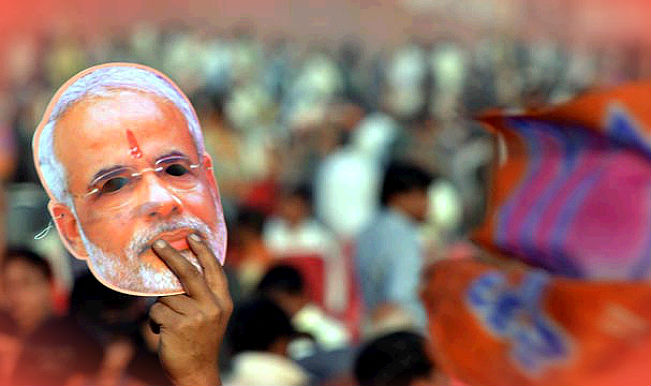 New Delhi, Sep 26: The BJP appears to be banking heavily on campaigning by Prime Minister Narendra Modi to shore up its performance in assembly polls in Maharashtra and Haryana with the party leaders keen that he addresses over 30 rallies in the two poll-bound states. The Bharatiya Janata Party, which had earlier decided to go it alone in Haryana, on Friday snapped its ties with Shiv Sena in Maharashtra and will now contest the assembly polls in alliance with some smaller parties. Also Read - PM Modi Likely to Hold COVID-19 Review Meeting With Chief Ministers of 7 Worst-hit States Next Week

The party seems to relying on Modi to improve its electoral fortunes in the two states. A senior BJP leader, who did not wish to be named, told IANS that they were keen Modi addresses over 30 rallies in the two states – nearly 20 in Maharashtra and eight-ten public meetings in Haryana.. Also Read - Chidambaram Says Farm Bills 2020 Undermine Food Security System, Slams BJP For ‘Maligning’ Cong's 2019 Manifesto

Modi is expected to begin campaign for assembly polls in the two states after his return from the US. He will launch the “Swachh Bharat Mission”, a campaign to clean India, Oct 2 and his rallies are expected to be planned between between Oct 3 and Oct 13.

Polling will be held in Haryana and Maharashtra, both ruled by the Congress, Oct 15. The assembly polls in the two states are crucial for the BJP as these will be the first round of elections after the Lok Sabha polls in which the party scored an emphatic victory.

It will also be the first assembly elections under party’s new president Amit Shah. Incidentally, the party has not declared chief ministerial candidates in the two states. Modi had spearheaded BJP’s victory in the Lok Sabha polls through a planned, well-publicised and focused campaign.

BJP will face multi-cornered contest both in Haryana and Maharashtra. While its decision to go it alone in Haryana was apparently driven by an assessment about a favourable atmosphere in the state, in Maharashtra, the party apparently did not want to play second-fiddle to the Shiv Sena, its alliance partner for 25 years.

Party leaders said that their aim was to form government in Maharashtra and not merely emerge as the single-largest party in the state.