Maharashtra Assembly Elections 2014: The BJP-Shiv Sena and Congress-NCP alliance will not break… Here’s why

Maharashtra is the perfect example of coalition politics and the faster all four parties understand the better their chances will be of winning the elections. 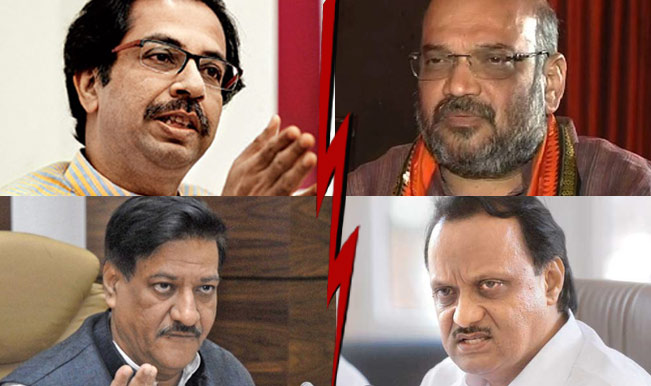 The Bharatiya Janata Party (BJP) -Shiv Sena (SS) alliance has reached its breaking point and the Congress seems willing to break its alliance with the Nationalist Congress Party (NCP). In both cases it appears like the alliances will be broken, with all four parties giving their allies ultimatums and ‘final offers’ which the other party is too happy to ignore. While it seems like a split is very much a possibility in both cases, one can still say that it will not happen. The stakes are, frankly, too high for both parties to ignore and here’s why it won’t happen. Also Read - Monsoon Session: Finance Minister Diluting GST Compensation Issue With ‘Act of God’ Excuse, Says DMK MP in Lok Sabha | Highlights

Maharashtra does not have a charismatic leader. None of the four major parties do, whether it is Congress or NCP; or BJP or Shiv Sena. Had the late Balasaheb Thackeray been alive, the Shiv Sainiks would have dared to go alone in the Assembly Elections. There would have been doubts about their success if that had happened, but they would atleast come close to the majority mark, if not cross it. One cannot even imagine the same happening under the leadership of Uddhav Thackeray. Also Read - WATCH | Congress MPs Burn Copies of Farm Bills in Parliament, Say 'Will Reduce BJP to Ashes'

If we look at big names in other parties then there is Prithviraj Chavan in Congress, Sharad Pawar in NCP and Devendra Fadnavis in BJP; none of these leaders have a pan-Maharashtra following, not even Pawar. One can say that none of these leaders will be able to perform a feat like that of Narendra Modi in Gujarat, Mayawati and Mulayam Singh Yadav in Uttar Pradesh or Jayalalitha in Tamil Nadu, where these leaders were able to help their parties cross the majority mark on their own. A reason for this is that none of the leaders in Maharashtra have the charisma that the successful pan-India leaders have.

A name that hasn’t been much talked about is that of Raj Thackeray. He might be the most charismatic regional leader in Maharashtra along with Pawar, but even he would not be able to help his party Maharashtra Navnirman Sena cross the majority mark alone.

The BJP and Congress both stand to lose more than the Shiv Sena and NCP if they fight alone because they are national parties fighting a state election without an alliance with a regional party. Also, there might be anti-cumbency working against the Congress. The Shiv Sena and NCP stand to lose because they don’t have a influential leader. Uddhav Thackeray does not have the charisma of his father and Aditya Thackeray is an untested person (if one gives him the honour of a consideration). There are doubts over Sharad Pawar’s influence outside the Vidarbha region and central Maharashtra. Also Pawar, as mentioned before, is more of a national leader than of Maharashtra.

All parties and leaders understand that it will be over-ambitious to go alone in Maharashtra. They have to respect their ally’s aspirations while giving consideration to their own wishes. Playing hardball will not help any party, be it regional or national. Maharashtra is the perfect example of coalition politics and the faster all four parties; BJP, Shiv Sena, Congress and NCP, understand the better their chances will be of winning the elections.