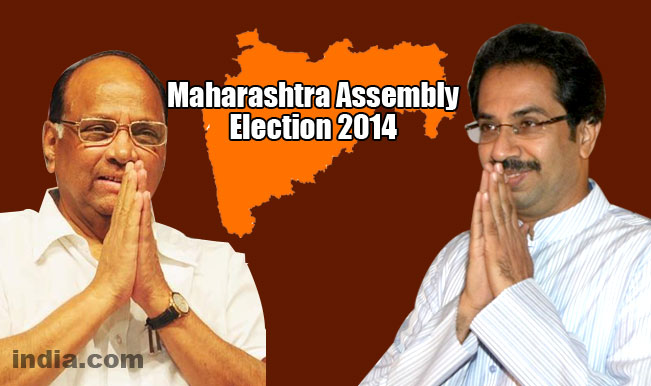 The exit poll results conducted by Today’s Chanakya, ABP Nielson C Voters and India Today Cicero, all predicted that Bharatiya Janata Party will come out as single largest party in Maharashtra Assembly Elections 2014.  Though all the exit polls predicts more number of the seats to BJP, only Today’s Chanakya gives clear majority to BJP. If the BJP fails to touch the 145 mark, there could be two possibilities of government formation. Either BJP would take support from Shiv Sena or NCP. We analyse the rare possibility of government formation if Congress gives its support to Sena-NCP alliance. Also Read - Subhra Kundu, Wife of Rose Valley Group Chief Gautam Kundu, Arrested By CBI

According to the exit poll results, BJP may win around 117-131 seats in the 288 seat assembly. The Shiv Sena will be second with 66-77 seats and Congress third with 30-40 seats. The NCP could be behind its former ally with 24-34 seats. Raj Thackeray’s MNS would win 4-10 seats. Other parties and independents could win just 18-26 seats. If the exit poll falls correct, BJP would need the support from Sena or NCP to form government. If Sena and NCP decide to come together and keep BJP out of power, they may try to form government with the help of Congress or independents. If Sena-NCP choose to go this way, they would wish to have support of Congress as independent legislators are hard to handle. Also Read - Karnataka: Is BJP Planning to End Taluk Panchayat? Congress Questions State's Intention

Will Shiv Sena-NCP shake hands? Political pundits who speculate about this post poll alliance give the reason of NCP President Sharad Pawar’s close relation with Sena chief late Bal Thackeray. Will Congress back Sena-NCP alliance to keep BJP away from power? If Congress get a chance, it would surely grab the opportunity as it did in Delhi.

If it happens, the situation of Maharashtra would be same like Delhi where BJP won more number of seats, failed to get majority and Aam Aadmi Party formed government with the support of Congress. Likewise, Maharashtra will have unstable government that could fall anytime. It would be another setback for BJP that despite performing way better than its rivals would not taste the victory.

However, there is a less chance of this alliance but one cannot any possibility in politics. After all, politics is a game of possibilities.