Mumbai, January 3: Mumbai University on Wednesday issued a circular saying that those students who were not able to attend the examination today due to ongoing violence across Maharashtra, especially

Mumbai, January 3: Mumbai University on Wednesday issued a circular saying that those students who were not able to attend the examination today due to ongoing violence across Maharashtra, especially in Mumbai, for them exams will be conducted later in due course of time. Also Read - Despite Strict Restrictions, Maharashtra Registers 61,695 Fresh COVID Cases In Last 24 Hours

The circular issued by Dr Arjun P Ghatule, Mumbai University, Director Boards of Examinations and Evaluation said, “It is hereby notified to all concerned Principals, Staff and Students that considering the unavoidable circumstances the students who could not be able to attend the examination as mentioned below scheduled to be held on Wednesday, the 3rd January, 2018 between 3:00 pm to 6:00 pm, the examination of such students will be conducted by the University later in due course of time”. Also Read - Hospitals in Mumbai Asked to Use 5-Star Hotels To Treat Patients With Mild Symptoms

The city remained tense today amid a massive bandh or strike called by Dalit groups and parties across Maharashtra as the state marks its third day of seething tension between Dalits and upper castes, mainly Marathas. 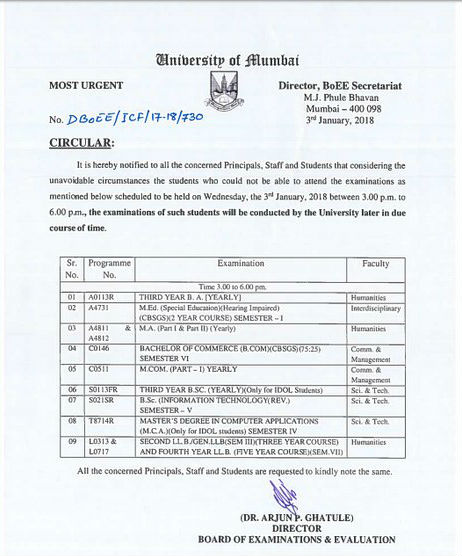 Supporters, of Dalit parties, tried to block trains, metro and buses in and around Mumbai and have attacked a car showroom in suburb Vikhroli. Two major roads in Mumbai’s Bandra were also blocked by protesters, who also forced to close shops and didn’t allowed vehicles to move.

Coupled wth route diversions by the police, it has caused traffic jams in parts of the city. The protests were also visible in Delhi.

Offices were open in Mumbai, as are schools though school bus operators did not ply buses in the morning as a precautionary measure.