The results for Maharashtra civic polls are a major boost to the BJP, which swept eight out of 10 corporations in the state, and a serious setback for Shiv Sena in its bastion, Mumbai, where it formed in 1966.

Mumbai, February 24: After Lok Sabha and Assembly elections the municipal elections are considered third in the hierarchy. But after the performance of Bharatiya Janata Party (BJP) in Maharashtra civic elections, it could now be said that the party is gaining momentum in the state by winning 8 out of 10 municipal corporations and also by sweeping in zilla parishad and panchayat samitis poll held this week. The results for Maharashtra civic elections were released today in which BJP has emerged as a major winner after a bitter falling-out with its old ally Shiv Sena.Also Read - BJP Would Remain at Centre of Indian Politics For Years to Come: Prashant Kishor's Latest Comments

In the Maharashtra civic elections 2017, state chief minister Devendra Fadnavis had put everything at stake, especially in India’s financial capital of Mumbai. As the counting started and in the first two-three hours it seemed that Devendra Fadnavis has put his bet on wrong horses and gambled foolishly. But after 12 noon on Thursday, the results started coming in favour of BJP. As BJP’s number started climbing relentlessly, supporters of the party started celebrating across the country. Also Read - Bigg Boss 7 Fame Kamya Panjabi Breaks Silence on Joining Politics: 'Not Hungry For Power, Want to Work'

Shiv Sena chief Uddhav Thackeray who said that the BJP didn’t deserve more than 60 seats in a seat-sharing pact, ended the day by BJP winning 82 seats on its own. The results for Maharashtra civic polls are a major boost to the BJP, which swept eight out of 10 corporations in the state, and a serious setback for Shiv Sena in its bastion, Mumbai, where it was born in 1966. After the break-up, the Shiv Sena held on to its Marathi vote bank, but it failed to mark majority in BMC election and won 84 seats in a house which consists of 227 seats. Also Read - He Can Get Me Shot, Says Bihar CM Nitish Kumar on Lalu Prasad Yadav's 'Visarjan' Claim

After the results in BMC, all eyes are now on the possible permutations and combinations that could help any one of them – Shiv Sena falling short of 30 seats and BJP falling short of 28 seats to win the mayor’s elections – unless both the parties join hands again. Also Read – Maharashtra Civic Elections 2017: How BJP made deep inroads in state politics – 10 points

On the other side, the BJP is the single largest party in Pune, Ulhasnagar, Nashik, Pune, Pimpri-Chinchwad, Solapur, Akola, Amravati and Nagpur.

In last one month, the BJP had launched a vociferous campaign against rampant corruption and alleged lack of transparency in BMC which was ruled by the Shiv Sena for last 25 years.

After a decisive victory in Maharashtra polls, Devendra Fadnavis said, “Our victory is the result of people’s acceptance of our agenda of transparency”. On speculations about an alliance with Shiv Sena, Fadnavis said, “What is the hurry? Wait for some time. We have not yet decided if an alliance has to be made or not. We will do so soon.”

The Congress, which performed badly across Mumbai, managed to win 31 seats (the party had won 51 seats in 2012 BMC polls), the NCP won 9 seats, MNS – 7 seats, AIMIM – 3 seats, Samajwadi Party – 6, others – 5 seats. All these small numbers seem to be important in a hung corporation where both the BJP and Shiv Sena are likely to try to obtain support to build a majority. 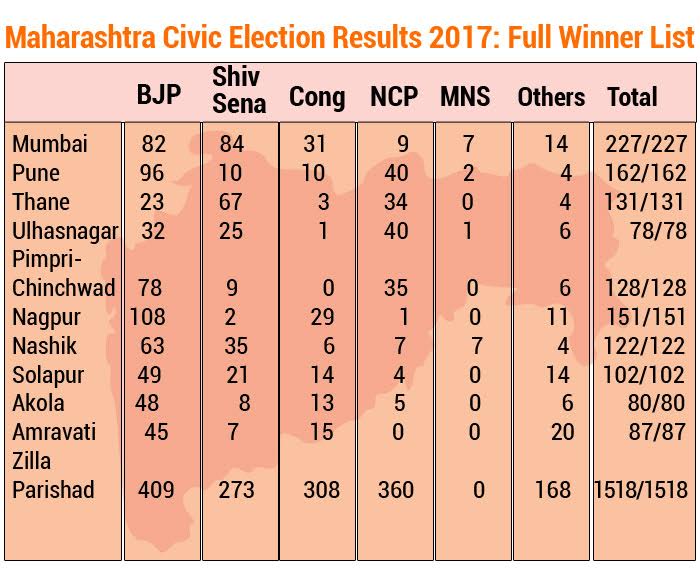 The recent result also throws an important story, which largely says that the state’s political space also belongs to BJP.