Dharmesh Varma, the man who runs marathons with his daughter to empower the girl child, has been recognised by India Book of Records in the category of 'Half Marathon With Stroller'.

A record holder in India, Dharmesh now hopes to also make it to the Guinness World Record with a message. He has made it a practice to run with his daughter Aarna and spread the message – ‘daughters are not a burden’. On February 26, Dharmesh also ran the IDBI New Delhi Half Marathon with Aarna and completed the distance of 21 km in 2 hours and 3 minutes. When India.com spoke to him in February, after the marathon, he said, “My daughters are no less than anyone.” Also Read - This Hyderabad Toddler Can Recognise Flags, Deities, Logos, Animals & More; Bags 5 Records For Extraordinary Memory Skills

Dharmesh is the father of twin daughters, Aarna and Mishty, who are a little over 3 years old. He runs marathons with Aarna even though he says he wants to run with Mishty, too, but that would be difficult. “Mishty is slightly impatient. She won’t sit in the stroller through 21 kms. I would have to stop run midway with Mishty,” he says. Also Read - Eliud Kipchoge Can Run Sub-2hr Marathon in Normal Competitive Race, Says Lead Pacemaker Erick Kiptanui 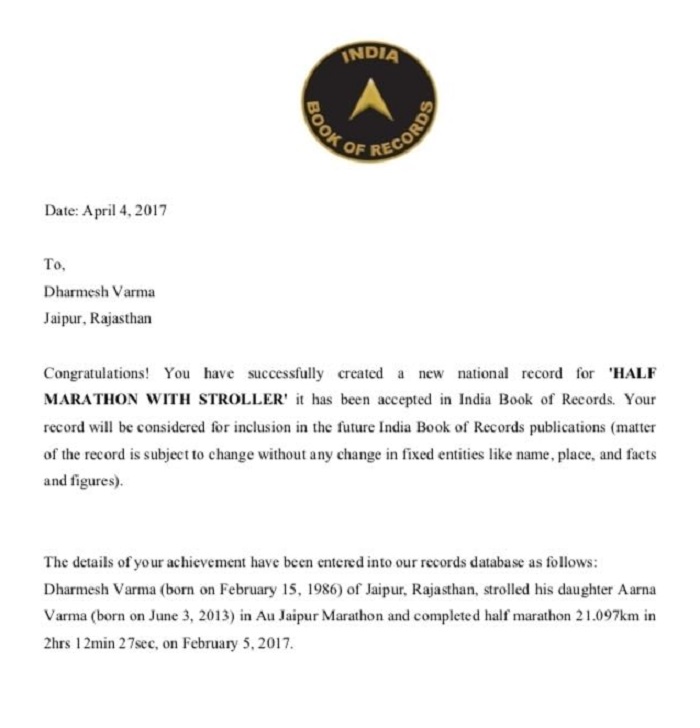 It was right before the Jaipur marathon that he got an email from the organisers to run with a t-shirt that reads ‘betiyan bojh nahi hain (daughters are not a burden)’. While he liked the idea, he requested the organisers to grant him permission to not just wear the t-shirt with the message, but also allow him to run with his daughter in a stroller. That is how his journey of running marathons with Aarna, spreading the message for daughters, began.

Dharmesh is a tattoo artist in Jaipur. His wife Divya owns a pet shop there. With Aarna and Mishty, the two continue to spread the message to empower the girl child.