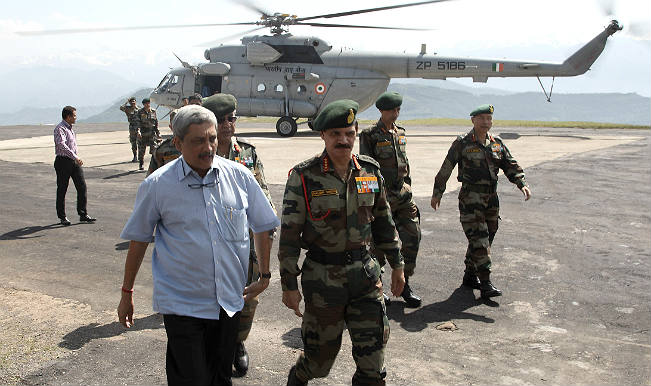 Indian Army Chief General Dalbir Singh Suhag left for Imphal today in order to assess the situation in a terror-torn Manipur. Of what has been the worst attack in on Indian Army since a decade, over 18 soldiers were killed and as many as 11 soldiers were killed on Thursday. Naga rebel outfit NSCN-K claimed responsibility for their attack which took place in the Chandel district. Also Read - COVID-19 Vaccine Will be Ready in Next Few Weeks: PM Modi at All-Party Meeting | Key Points

Prime Minister Narendra Modi had termed the attack as ‘very distressing’. Modi took to Twitter to express his anguish over the issue. Modi tweeted, “Today’s mindless attack in Manipur is very distressing. I bow to each and every soldier who has sacrificed his life for the nation.” A high-level meeting was convened where Home Minister Rajnath Singh, Defence Minister Manohar Parrikar and National Security Advisor Ajit Doval were called upon by Prime Minister to evaluate the situation after the brutal attack. (Also read: Manipur ambush: 18 soldiers killed; NSCN-K claims responsibility) Also Read - Rahul Gandhi Seems To Lack Consistency, Says NCP Chief Sharad Pawar

Indian Army’s 6th Dogra Regiment convoy was attacked by the rebel outfit at around 8.30 in the morning. The area, Chandel, is under the rule of Armed Powers Special Forces Act (AFSPA). The unit was on a Routine Road Opening Patrol (ROP) when the guerrillas attacked the group with RPGs and IEDs. There was a heavy exchange of bullets from both the sides which resulted in 18 deaths.

Congress President Sonia Gandhi and Congress Vice President Rahul Gandhi also condemned the attack. Rahul said, “Extremely sad to hear about the attack on the army convoy in Manipur where several of our young jawans lost their lives. We stand with each of them in this hour of tragedy.”