While the opinion poll considered situations before the unrest and economic blockade, recent incidents have made it quite difficult to ascertain which side the current of the voters' opinion shall sway.

New Delhi, Jan 14: Manipur is set to go for elections in March 2017 and prior to that various agencies held their opinion polls to get an idea of which party has a chance of winning in the North-Eastern state. The tenure of the present legislative assembly comes to an end on March 18, 2017 and the elections will be held in 2-phases on March 4th and March 8th, 2017. With 60 assembly seats, the prime contenders, the ruling-Congress party and the BJP will have to play their cards carefully in the state amid the unrest prevailing owing to the economic blockade called in by the United Naga Council (UNC). Also Read - 'Light a Diya of Reason, Not Superstition', Congress' Kapil Sibal Mocks PM Modi's Appeal to Nation

Of all the opinion polls that will be considered here, the major is India Today’s Axis poll. This opinion poll shows an interesting trend and according to the poll, the Manipur election will lead to the BJP gaining power and forming government in the second North-eastern state. Although the opinion poll took place in the month of October 2016, and the effects of the Economic blockade has not been taken into consideration, the poll showed that the BJP will secure a majority with 31-35 seats, followed by the Congress with 19-24 seats and the Naga People’s Front (NPF) securing just 3-5 seats. Also Read - How Racially-Motivated Spit Attacks & Hate Crimes Across the World Are More Deadly Than Coronavirus 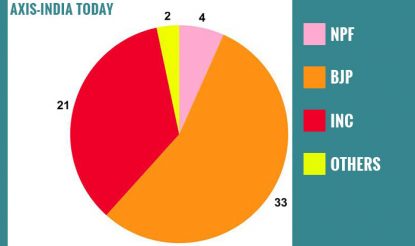 However, the opinion poll was conducted before things worsen for Manipur with the Economic blockade lasting for more than three months. The primary reason for the blockade is the newly created seven districts, which reportedly undermines the idea of Nagalim, the unity of Nagas in Manipur. hence, the civil body started the blockade taking Manipur to a state of crisis, which necessitated the deployment of more than 17,000 paramilitary troops to maintain peace in the state. The protesters vandalised vehicles and hence, trucks guarded by armed security forces had to transport necessities in the state. In such a situation, it is really confusing which side the general public opinion will sway as both Central and State governments have been evidently trying to help the people of the region.

According to the UNC, the creation of the seven districts is a desperate attempt to woo the Meitei population of the state by the state CM Okram Ibobi Singh. At the same time, now that the Central government is helping out the state govenrment to actually bring back peace in the region, it seems, the Naga factions are unhappy with the Central Government, that is the BJP as well.

In addition to the above situation, five opposition parties have joined hands to form alliance and contest the elections. These parties namely the Aam Aadmi Party (AAP), Communist Party of India (CPI), CPI (M), the Janata Party (U) and the National Congress Party (NCP) formed the Left Democratic Front (LDF) to oust the Congress government. Obviously, this development must have affect on the poll results as well.

Apart from this, none of the opinion poll has seriously considered the party led by Irom Sharmila. People’s Resurgence and Justice Alliance (PRJA) which has declared that it will oust the Congress-led government is a major challenge for both the Congress and the BJP. While the Axis-India today opinion poll referred that Irom Sharmila has no considerable influence over the people and repelling of AFSPA is not the primary concern, Sharmila visibly has a fan following and might be influential enough to secure some form of majority, which might threaten the national parties of obtaining absolute majority.