Manmohan Singh lying with a straight face, hits back BJP

In a no holds barred counter-attack on Manmohan Singh, BJP today branded the former Prime Minister a "puppet" and accused him of "lying with a straight face" after he charged the Modi government with harping on corruption to divert the people's attention to non-issues. 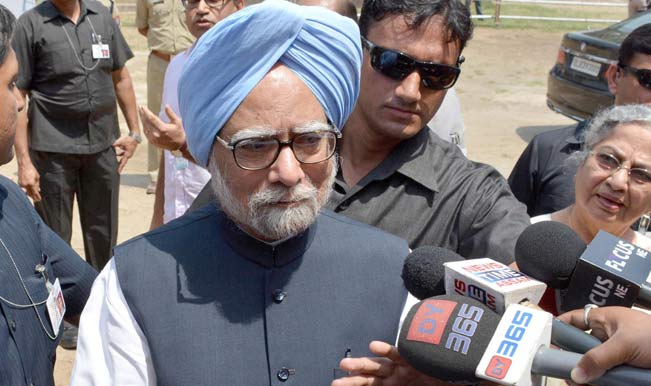 Surat/New Delhi, May 27: In a no holds barred counter-attack on Manmohan Singh, BJP today branded the former Prime Minister a “puppet” and accused him of “lying with a straight face” after he charged the Modi government with harping on corruption to divert the people’s attention to non-issues. Leading the charge was BJP President Amit Shah who told reporters in Gujarat that “scams” involving Rs 12 lakh crore had been perpetrated during Singh’s 10-year rule and he “cannot run away from its responsibility” by merely saying that he had not “enriched” himself. “I believe that a Prime Minister’s responsibility is not limited to not doing corruption himself but to also ensure that others are not allowed to do corruption. He has to root out corruption from the system. Under Singh’s rule, scams of (Rs) 12 lakh crore occurred and Congress cannot run away from its responsibility,” Shah said. (Also read: BJP taunts Manmohan Singh, says ‘silence of self-defence when everything has been lost) Also Read - Breaking News: Fire Breaks Out in Delhi's Uttam Nagar, 15 Fire Tenders Rushed to Spot

“Debate is not over simply because you (Singh) do not yourself engage in corruption. A Prime Minister is expected to provide corruption free governance,” he said. At an event in New Delhi earlier in the day, Singh launched a sharp attack on the BJP government for its frequent reference to scams under his tenure and asserted, “I have not used my public office to enrich myself, to enrich my family or my friends. The BJP government keeps on harping on this theme of corruption because it wants to divert people’s attention to non-issues.” Also Read - Mamata's Nephew Abhishek Banerjee Sends Legal Notice to BJP's Suvendu Adhikari

BJP spokesperson Sambit Patra said Singh had broken his silence after being “exposed” by “books after books”, “facts after facts” and not only by agencies like CAG and CBI but also by “his own bureaucrats”, a reference to allegations by former TRAI chairman Pradip Baijal that Singh had warned him of harm if he did not cooperate on 2G telecom licenses. Attacking the former Prime Minister for his assertion that he had not enriched himself or his family, Patra said Singh was a “shadow Prime Minister” who used his office to “enrich” 10 Janpath, a reference to Congress President Sonia Gandhi.

“Country knows… If there is a Prime Minister without the Gandhi family, then he is merely a shadow Prime Minister, a puppet Prime Minister with the strings lying with the 10 Janpath. In such a scenario, the country knew Singh’s strings were lying with 10 Janpath,” the BJP spokesperson said. Alleging that Singh’s uttering were “full of lies”, BJP secretary Siddharth Nath Singh said, “One must give credit to him that he is (the) best politician India has produced in the last many decades… He can lie with a straight face and say I have not done anything wrong.”