Given the high rate of failures --only 21 of the total of 51 missions sent to Mars by various countries being successful-- the success of MOM in the very first shot would boost India's global standing in Space. 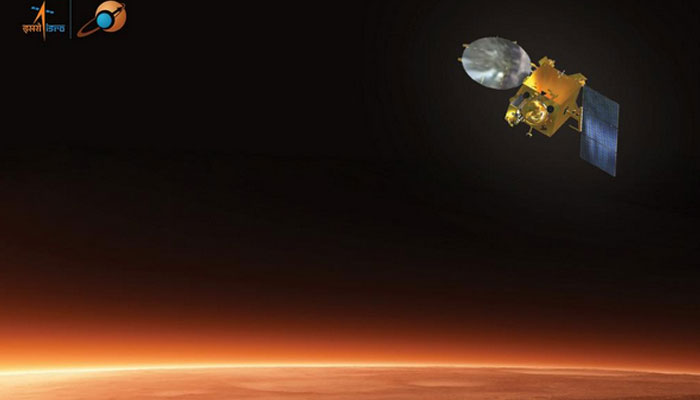 Bangalore, Sep 24: India became the first country to enter the Mars orbit on a maiden mission on Wednesday when the Mars Orbiter Spacecraft Mangalyan was put in orbit around Mars. India also became the first Asian country and ISRO the fourth space agency to send a satellite to the Red Planet. European, US and Russian probes have managed to orbit or land on the planet, but after several attempts. Also Read - Bacteria From Earth Can Survive in Space & Could Endure The Trip to Mars; Says New Study

Prime Minister Narendra Modi was present to witness the crucial Mars Orbiter Insertion at the Spacecraft Control Centre at ISRO Telemetry Tracking and Command Network (ISTRAC) here. The dormant main engine on the spacecraft was testfired flawlessly. In the final lap, the operation began at 07:17:32 hrs by firing the LAM along with eight smaller liquid engines for about 24 minutes. The tricky manoeuvre involved slowing down the spacecraft moving at benumbing speed to be captured in the Martian orbit. Also Read - Still Confused About Which Mask to Use? Indian Scientists Reveal The Most Effective Face Mask to Prevent Covid-19 | Read

The main engine on the spacecrat, in slumber since the 300-day journey began, was woken up on Monday, though for four seconds after a successful crucial manoeuvre. The 440 Newton Liquid Apogee Motor (LAM) on Mars Orbiter Spacecraft was last fired on December 01, 2013. Yesterday’s twin operation also involved a trajectory correction that means the spacecraft is on course.

Given the high rate of failures –only 21 of the total of 51 missions sent to Mars by various countries being successful– the success of MOM in the very first shot would boost India’s global standing in Space. The MOM entered the Mars Gravitational Sphere of Influence on Monday. The spacecraft had escaped the earth gravity pull on December 1 last.

The Rs 450-crore project was launched from Sriharikota in Andhra Pradesh from the old workhorse Polar Satellite Launch Vehicle (PSLV) on November 5, 2013 with the aim of reaching the red planet’s atmosphere traversing 680 million km. On Wednesday the scientists undertook the “challenging task” when restarted the on board liquid engine, which has been in sleep mode for nearly 10 months, for Mars Orbit insertion. The project is expected to provide the scientific community better opportunities in planetary research.