Maut se Than Gayi!: The Poet-Politician, Who Changed the Fabric of Indian Politics, Loses to Death

Known for his exemplary oratory skills, Vajpayee ruled the hearts of many across the political spectrum, irrespective of the political party and ideology.

New Delhi, Aug 17: “Maut ki umar kya hai? Do pal bhi nahi, Zindagi silsila, aaj kal ki nahi…”, an ailing Atal Bihari Vajpayee had written in one of his famous poems which he penned during his face-off with death at a New York Hospital, 30 years back in 1988. Also Read - In Pics: President Kovind, PM Modi, Others Pay Tribute to Bharat Ratna Atal Bihari Vajpayee On His Birth Anniversary

But on August 16, 2018, the ‘tallest leader’, who played a pivotal role in changing the fabric of Indian politics which was totally in the hands of the Indian National Congress ever after the Independence, finally lost to death, taking his last breath at 5.05 pm. Also Read - In a First, Indian Army Convoy Drives Through Newly-built Atal Tunnel | WATCH

Such was Vajpayee’s fame and respect around the globe that even those who envied him all through this time, including former Pakistan PM Pervez Musharraf, went all praises for him, keeping the personal and political differences at bay.

Known for his exemplary oratory skills, Vajpayee ruled the hearts of many across the political spectrum, irrespective of the political party and ideology.

It was Vajpayee who, along with LK Advani, Murali Manohar Joshi and others, had changed the face of the BJP leading the saffron party to the Centre in the 1990s.

After his government collapsed after 13 days in 1996 and then again after 13 months in 1998, Vajpayee – having good rapport with leaders of contrast political leaning – managed to attract the allies to form the National Democratic Alliance in 1999 and form the first saffron government at the Centre.

During a debate on trust vote in Parliament, opposition leaders had said that Vajpayee was a good leader but in the wrong party. He responded by saying, “Vajpayee to achha hai, par party theek nahi hai. Toh achche Vajpayee ka kya karne ka iraada rakhte hain. (You say that Vajpayee is good, but his party is not…Then what do you intend to do with the good Vajpayee.)

Notably, it was only possible due to the charismatic leadership of Vajpayee that the BJP which was considered “untouchable” at that time, especially after the Babri Masjid demolition, managed to come to power.

The poet-politician, along with LK Advani led the BJP to emerge as a dominant force, eclipsing the Congress for the first time, but never wore the party’s core Hindutva ideology on his sleeve.

While Advani’s ideological leadership galvanised the party’s cadres and core support, Vajpayee’s soaring oratory, common touch and easy charm made him a favourite among the masses. He even maintained a sizable distance from the party’s fountainhead Rashtriya Swayamsevak Sangh, of which he was a karyakarta during his early age.

Not only was Vajpayee revered as a stalwart politician but was also a spell-binding orator who used poetry as a medium to give expression to his deepest thoughts. 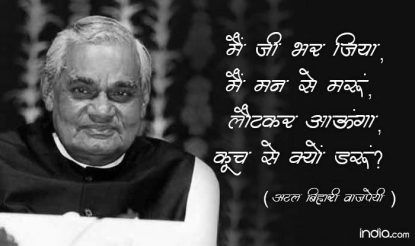 In his most-remembered speech during the trust vote in May 1996 after his government fell in 13 days, Vajpayee had said: “’Satta ka khel chalega’ (the game of power will go on). Governments will come and go. Parties will be made and unmade. This country should survive, its democracy should survive.”

“You want to run the country. It is a very good thing. Our congratulations are with you. We will be completely involved in the service of our country. We bow down to the strength of majority. We assure you that till the time the work that we started with our bare hands in national interest is not completed, we shall not rest. Respected Speaker, I am going to the President to tender my resignation,” he added.

During his 13-month government in 1998, Vajpayee shook the world when India conducted nuclear tests and emerged as a nuclear power with Operation Shakti in Pokhran.

The entire operation was conducted in such high secrecy that nobody except Vajpayee and home minister LK Advani knew about it.

The nuclear tests invited international outrage, with the United States slapping sanctions against India. The Left slammed the government and accused them of “trying to equate the bomb with patriotism and whip up a jingoistic fervour”.

Facing the opposition’s ire, Vajpayee defended his actions, asserting that the country should be self-sufficient when it comes to national security.

“I was in the House in 1974, when under Indira Gandhi’s leadership, nuclear tests were conducted. We had welcomed it, despite being the Opposition, because it was done for national security. What danger was there at that time? Should we begin to prepare ourselves only when we are posed with danger? If we are well-prepared, any danger in future can be taken care of,” he said in the Lok Sabha.

“The Pokhran-2 nuclear tests were conducted neither for self-glorification, nor for any display of machismo. But this has been our policy, and I think it is also the policy of the nation, that there should be minimum deterrence, which should also be credible. This is why we took the decision to conduct tests,” he added.

Vajpayee was admired not only by his associates but also by leaders of the opposition for the way he handled paradoxes with adroitness, particularly the 1992 Babri Masjid demolition and the 2002 Gujarat communal riots.

When no BJP leader had come forward to express regression over the demolition of Babri Masjid by thousands of karsevaks, Vajpayee was the lone party leader who apologised for it, terming the tragedy as “unfortunate” and saying that it “should not have happened”.

In 2002, days after the large-scale communal violence in Gujarat, PM Vajpayee had told the then chief minister Narendra Modi that he must abide by his “raj dharma” and should make sure that no discrimination is done on the basis of caste, creed or religion. 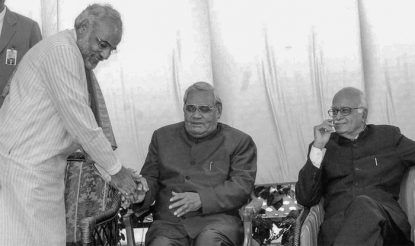 In fact, political pundits believe that Gujarat riots were one of the reasons why Vajpayee could not retain power in the 2004 Lok Sabha elections.

In his autobiography, former President Pranab Mukherjee wrote that the Gujarat riots were “possibly the biggest blot” on the Vajpayee’s government that could have cost the BJP the 2004 Lok Sabha elections.