Till date, the deadly challenge has pushed three teenagers into committing suicide in India while two were rescued before they could take the extreme step.

New Delhi, August 16: Concerned over children being forced to commit suicide on the Blue Whale Challenge game, the government has taken some tough measures to stop it, Union Information Technology Minister Ravi Shankar Prasad informed media. The Union Government has directed the top internet platforms – Google, Facebook, Whatsapp, Instagram, Microsoft and Yahoo to immediately remove the links of the notorious online game. Till date, the deadly challenge has pushed three teenagers into committing suicide in India while two were rescued before they could take the extreme step. Also Read - Don't Presume What SC Will Decide on Article 370...: Omar Abdullah Takes Dig at Ravi Shankar Prasad For 'Won't Restore' Remark

“We have taken tough measures against ‘Blue Whale’ game. Clear instructions issued to tech platforms regarding this. Under Indian IT ecosystem, no initiative will be permitted that provokes young boys to commit suicide; this is plainly unacceptable,” Prasad said while interacting with media. Prasad also urged to all IT platforms to abide by directions and said any violation will be taken very seriously. Also Read - Article 370 Won't be Restored, Says BJP; Accuses Mufti of Disrespecting Indian Flag

The Union Government has asked the companies to “ensure” that any link leading to the “deadly game” is immediately blocked. A letter from the IT Ministry released on August 11 said, “Instances of children committing suicide while playing Blue Whale Challenge have been reported in India…You are hereby requested to ensure that any such link of this deadly game in its own name or similar game is immediately removed from your platform”. Also Read - Bihar Assembly Elections 2020: NDA is One, Will Contest Polls Together, Says Ravi Shankar Prasad

According to several reports, the Blue Whale Challenge is a suicide game in which the player is given certain tasks on a daily basis for 50 days and the final task leads to suicide. The participant is also asked to share photos after finishing each challenge.

The initiation has been taken by the government after a suspect case of suicide due to the ‘Blue Whale Challenge’ game emerged in Kerala. Some reports suggest that the family of a 16-year-old teenager, who had committed suicide by hanging himself inside his home last month, today said they suspected that it was a case of game addiction.

On Wednesday morning, a police team visited the home of a Kerala teenager in search of evidence to determine if he killed himself of the online game. 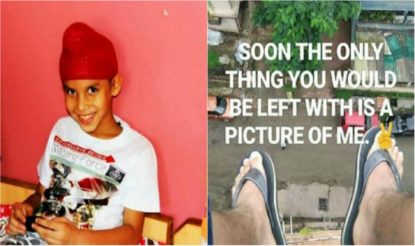 Fourteen-year-old Mumbai Manpreet Sahans committed suicide to win dreaded ‘Blue Whale Challenge’. This is what he posted on his Facebook page before committing suicide

Over 130 teenagers have committed suicides across Russia and Central Asian countries of Kazakhstan and Kyrgyzstan where the game is in rage. The 50-day challenge which leads teenagers to end their life is believed to have originated in Russia. The game instructs participants to perform increasingly dangerous tasks with the last step being taking your own life.