The rainfall that lashed the regions in Mumbai and its suburbs on Tuesday had caused significant damage to the residents. Meanwhile, the Met Department has predicted isolated heavy showers on Wednesday.

Mumbai: The Meteorological department has predicted heavy intermittent showers at isolated regions in Mumbai and its suburbs on Wednesday. Nine persons were killed and at least 24 were reported missing after Tiware dam in Tehsil Chiplun of Ratnagiri breached following incessant rainfall resulting in a flood-like situation in downstream villages, officials said on Wednesday.Also Read - Has COVID Fourth Wave Started in Maharashtra? State Records Highest Cases In 2 Months | Details Here

The National Disaster Response Force (NDRF) team, members of civil administration, police and volunteers had rushed to the spot. Around 12 houses near the dam were washed away. Waterlogging was prevalent in many parts of the city. Besides, at least 24 persons had lost their lives in the wall collapse in Pimpripada area of Malad East due to heavy rainfall on Tuesday. Also Read - ₹ 500 Fine, 3-Month License Suspension: Mumbai Police Tightens Rules For Pillion Riders Without Helmet. Deets Here 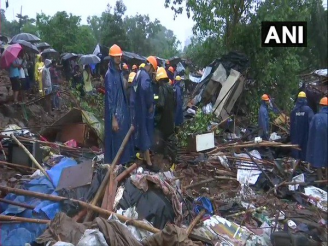 At least 25 people lost their lives in rain-related accidents across Mumbai as on Tuesday as the city witnessed the heaviest rainfall yesterday, breaking its record of 1974. (Catch all the live updates on Mumbai rains here) Also Read - Fashion Designer Jumps To Death From 14th Floor In Gurugram, Probe Ordered

Life in Mumbai virtually came to a standstill as the rainfall in the city had clogged the roads and disrupted the local train services. Here is the list of trains that were rescheduled or cancelled or partially cancelled due to the very heavy rains in Mumbai area, news agency ANI quoted Sunil Udasi, the Chief Public Relations Officer of the Central Railway as saying. 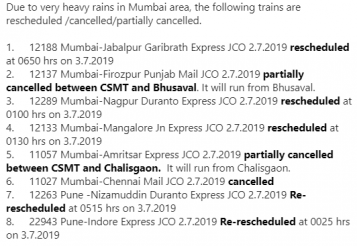 Besides, the road and rail, flight operations at Mumbai’s Chhatrapati Shivaji International Airport is also hit severely by the rains. The main runway at Mumbai airport is still closed and a secondary runway is being operated, stated news agency ANI on Wednesday adding that apart from the cancellations, the flight operations are smooth.

Notably, the SpiceJet airlines alone had cancelled 203 services due to incessant rains and suspension of operations from the main runway due to the skidding of an aircraft on Monday night, stated airport officials said. Besides, yet another 350-odd flights –both arriving and departing — were delayed between 28-51 minutes (till 7 pm), as per the live flight tracking website Flightradar24.

Mumbai airport authorities had earlier on Tuesday said 52 flights were cancelled and another 55 diverted to the nearby airports till 10 am Tuesday due to “inclement weather” and partial closure of operations. A Mumbai-bound SpiceJet flight from Jaipur carrying 167 passengers and crew overshot the runway here after landing amid heavy rains, which have severely hit normal life in the city over the last two days.

On Tuesday, a Boeing 737 800 aircraft operated as flight SG-275 on way from Pune, veered off towards the right side during landing on runway 19L. Aviation watchdog DGCA had said in a circular that crew members should be well aware of aircraft limitations during adverse weather operations and airlines should carry out their own “risk assessment” before operating in such conditions.

The Maharashtra government on Tuesday declared a precautionary public holiday in the capital city owing to the incessant rainfall. Chief Minister Devendra Fadnavis had requested people to stay indoors unless they have absolutely important work outside.

Following the Brihanmumbai Municipal Corporation (BMC)’s order, all the schools and colleges were shut down in Mumbai and in other parts of coastal Konkan region. The Mumbai University also postponed the exam of B.Sc Computer Science for first and second-year students due to heavy rains.

Maharashtra Chief Minister Fadnavis had also cancelled his scheduled groundbreaking function of the construction of a new building for MLAs.